I am so sick today folks.  Just really unwell, I feel horrible and have been sitting in my comfy pj's all day long.

I'm extremely thankful that my husband is on leave and able to take care of the children, and me, while I'm down with this awful cold.

Here I was hoping and praying that I would be skipped this time around, but unfortunately it wasn't meant to be.  I am choosing to look at this in a good light, in the sense that at least it's happening now and not during Christmas.  Praise the Lord. 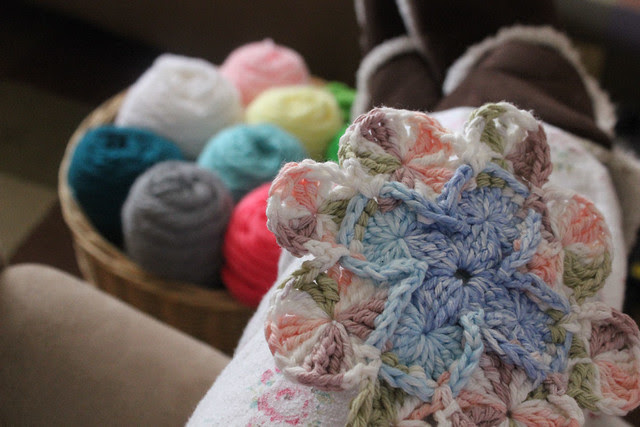 I am taking this downtime to relax on the couch with my crochet basket. And to try a new pattern which I've had bookmarked for a few years. Completely forgot about it until I was cleaning my bookmarks yesterday morning, so last night as hubby was at class I picked up some leftover dishcloth yarn and began the process of learning the stitches. 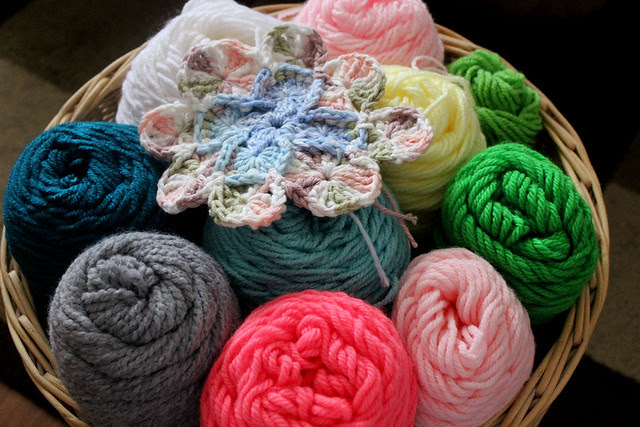 I would be lying if I said this pattern was easy at first.  It wasn't.  I read and re-read and read again the instructions and it just wouldn't sink in.  I was not understanding Sarah London's instructions, it just made no sense whatsoever.

But I persevered and then it suddenly clicked and wow is it easy.

I have no doubt that you all could make this as well, but I decided to take a few pictures to show some of the steps that were driving me insane at first. 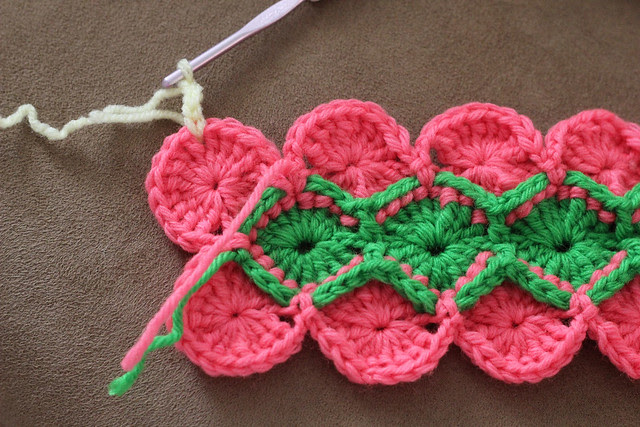 Tried the square pattern first but then decided to go with theoblong as I'm not yet sure whether I'll be turning it into a pillow or a blanket.  We'll see.

In the picture above, I've done the first two rows and am now joining with a new color.Where it says to join between the 4th and 5th stitch.....that's where you will be starting the new color. 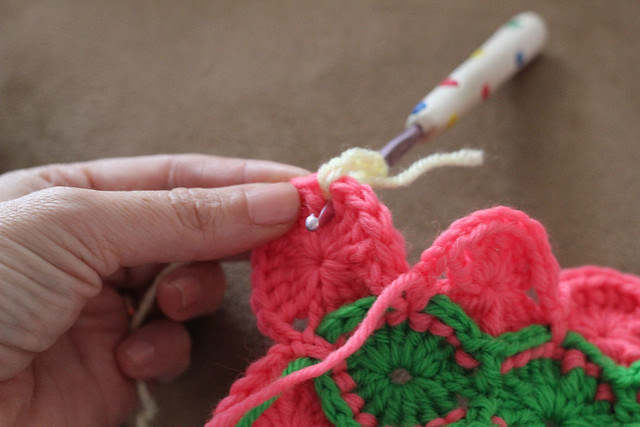 After chaining 5 then you'll be working in the posts of the treble stitches. I know, I know, it confused the heck out of me at first, but let me show you.....yarn over two times, then insert your hook from the back to the front.

Wrap the hook around the post of the stitch and stick it into the back, below you can see how it looks, you are now looking at the back of the crochet row. 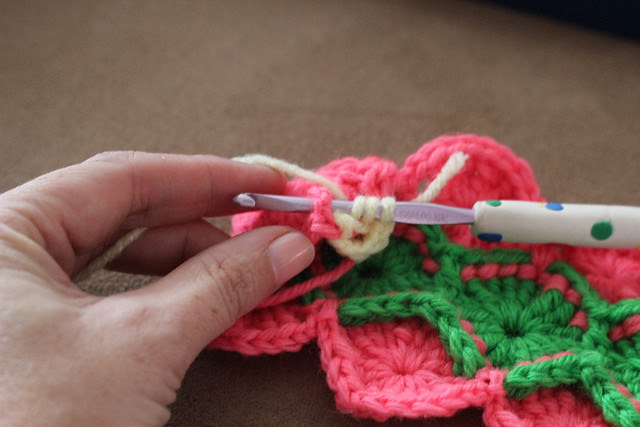 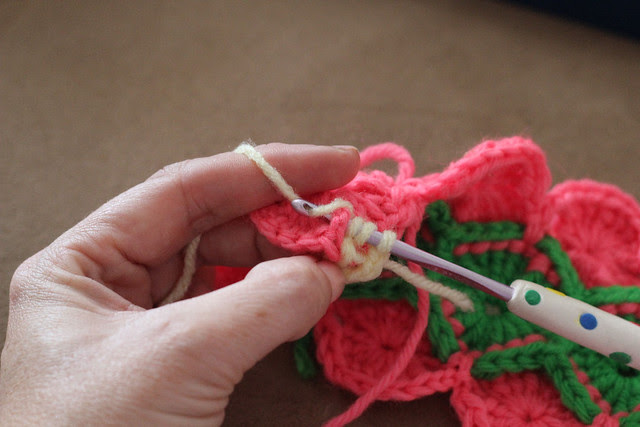 Yarn over two times again and 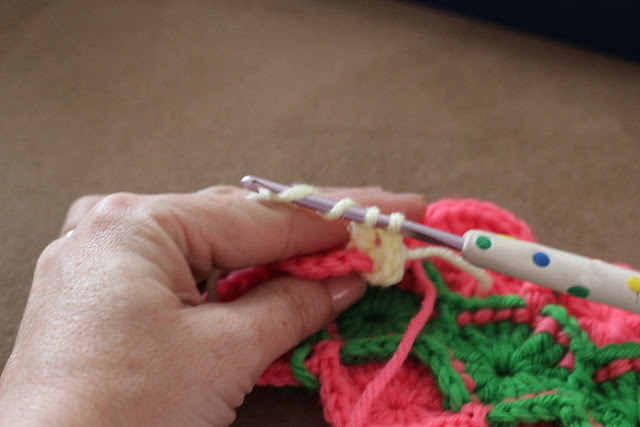 repeat by once again bringing the hook from the back to the front, wrapping it around the post of the next stitch and then to the back again. 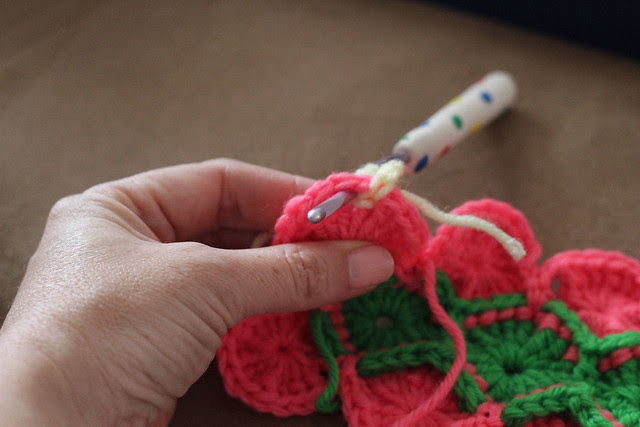 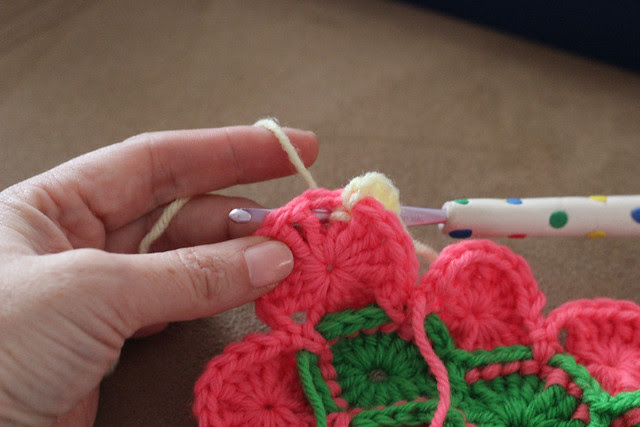 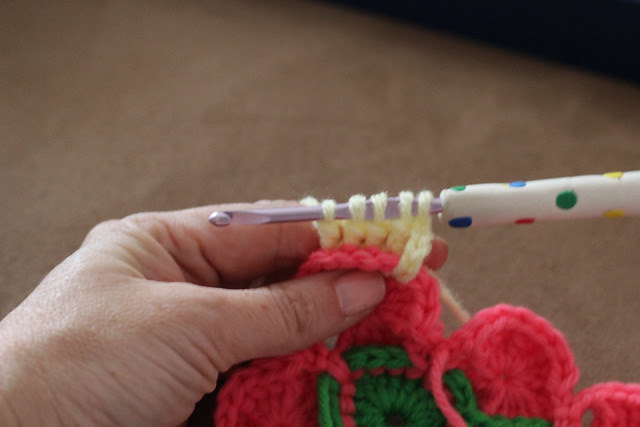 continue until you've worked all 4 posts as directed in the pattern, then yarn over and pull through all the loops left on the hook. You've now completed a Cluny Group. 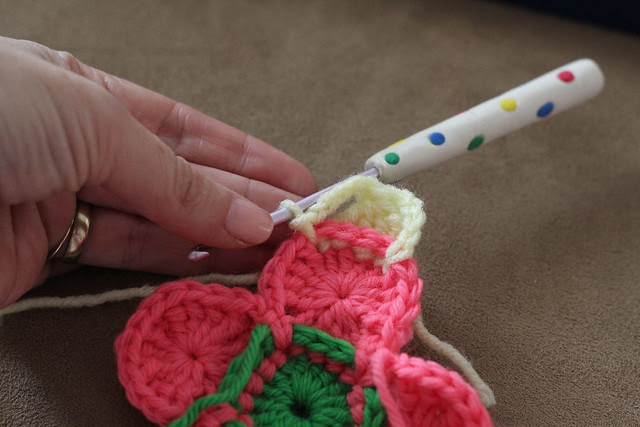 There you have it. I hope that made a little sense, I'm not very good at explaining crochet steps LOL

The rest of the pattern is just the same thing over and over.

Now, one of the things that most confused me at first, aside from these cluny groups using the back posts of the stitches......was the part where it tells you to work the dtr stitches into the top of the cluny groups.

Drove me insane at first until I realized exactly where they were supposed to go. Let me show you where you'll be inserting your hook. 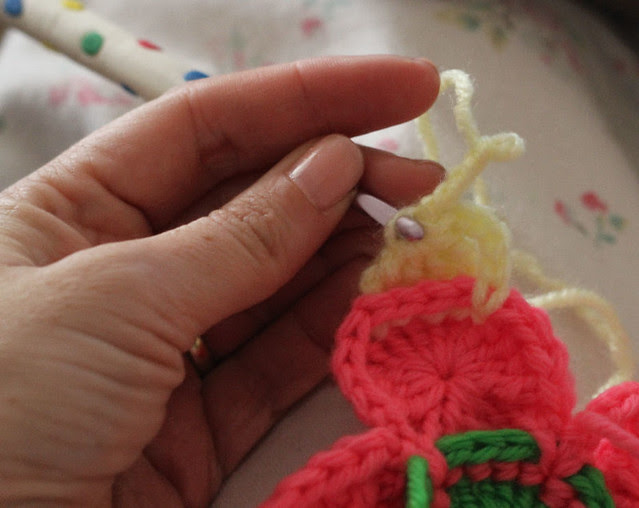 There's a little spot above the cluster that is where you will be working the DTR's, I tried to exaggerate the hole a bit more so you could see better 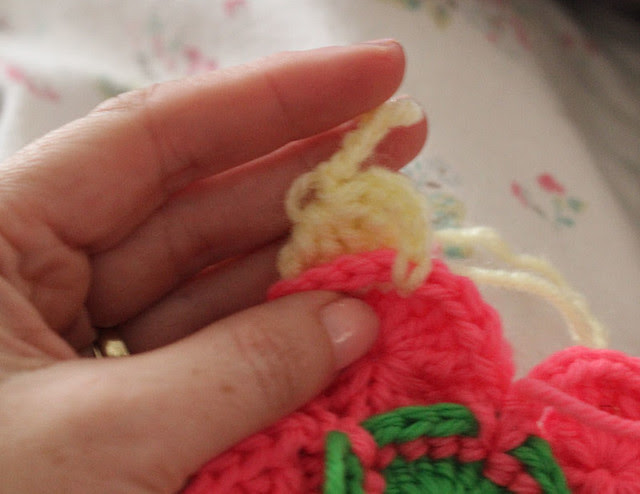 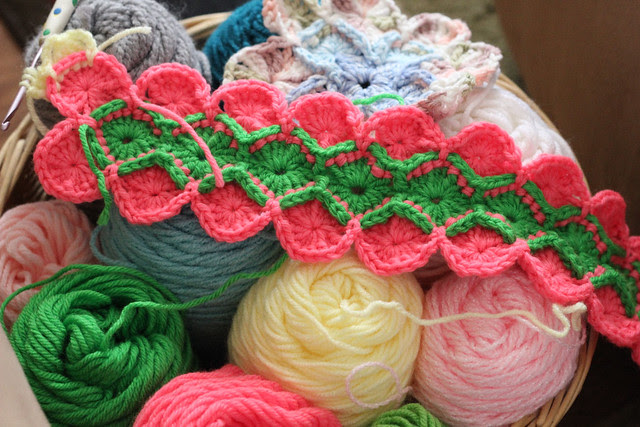 I do hope these helped you a little. If there's something else in the pattern you need help with and I can help, feel free to ask :)

You can check out the original pattern for the Oblong Wool-eater blanket at Sarah London's blog, here.

at 4:54 PM
Email ThisBlogThis!Share to TwitterShare to FacebookShare to Pinterest
Filed under: crochet WIP