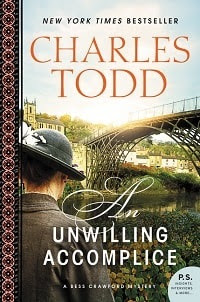 In this absorbing and atmospheric historical mystery from New York Times bestselling author Charles Todd, World War I battlefield nurse Bess Crawford's career and life are in jeopardy when a murder is committed on her watch

Bess Crawford has been summoned by the War Office to accompany a wounded soldier from Shropshire to Buckingham Palace, where he's to be decorated for gallantry by King George himself.

Heavily bandaged and confined to a wheelchair, Sergeant Jason Wilkins will be in her care for barely a day. But on the morning after the ceremony when Bess goes to collect her charge for his return journey, she finds the room empty. How could such a severely wounded man vanish without a trace?

Both the Army and the Nursing Service hold Bess to blame for losing the war hero. The Army now considers Wilkins a deserter, and Scotland Yard questions Bess when Wilkins is suspected of killing a man in cold blood. If Bess is to clear her name and return to duty in France, she must prove that she was never his accomplice. But the sergeant has disappeared again and neither the Army nor the police can find him.

Following a trail of clues across England, Bess is drawn into a mystery that seems to grow darker with every discovery. But will uncovering the truth put more innocent people in jeopardy?

I've never been a huge fan of mysteries, not until I read my first Charles Todd book and then I became hooked, and I wondered why I had never really taken the time to read this genre.

I think one of the things that I most love about this author's work is that it's not only a mystery but he weaves in History, which for this History buff gal, is all it takes to get me interested.

Bess Crawford is a World War I battlefield nurse and she is called upon to escort a wounded soldier to a ceremony where he will be honored by the King for his service.  From the get go she is suspicious as she can't understand why this soldier would ask for her specifically when she can't even remember ever treating him.

The ceremony goes off without a hitch, but it is what happens after that sets the story into motion.

The soldier disappears and Bess is now facing the scrutinizing eyes of the Army and the Nursing Service who consider her an accomplice, I mean it's easy to see how considering she was requested by name by this soldier.  It's quite clear that he has deserted but Bess now has to figure out how to clear her name and set the record straight.

I quite enjoyed this story, watching Bess follow a trail of clues all over England in her quest not only for the missing soldier, but trying to find out what he's about, who he really is, and how to prove her innocence.

Thoroughly enjoyed this one :)

at 8:25 AM
Email ThisBlogThis!Share to TwitterShare to FacebookShare to Pinterest
Filed under: an unwilling accomplice by charles todd, tlc book tours