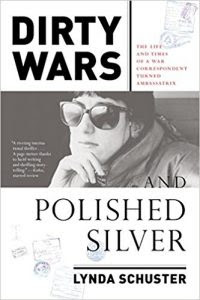 About Dirty Wars and Polished Silver: The Life and Times of a War Correspondent Turned Ambassatrix

From a former Wall Street Journal foreign correspondent, an exuberant memoir of life, love, and transformation on the frontlines of conflicts around the world

Growing up in 1970s Detroit, Lynda Schuster felt certain life was happening elsewhere. And as soon as she graduated from high school, she set out to find it.

Dirty Wars and Polished Silver is Schuster’s story of her life abroad as a foreign correspondent in war-torn countries, and, later, as the wife of a U.S. Ambassador. It chronicles her time working on a kibbutz in Israel, reporting on uprisings in Central America and a financial crisis in Mexico, dodging rocket fire in Lebanon, and grieving the loss of her first husband, a fellow reporter, who was killed only ten months after their wedding.

But even after her second marriage, to a U.S. diplomat, all the black-tie parties and personal staff and genteel “Ambassatrix School” grooming in the world could not protect her from the violence of war.
Equal parts gripping and charming, Dirty Wars and Polished Silver is a story about one woman’s quest for self-discovery—only to find herself, unexpectedly, more or less back where she started: wiser, saner, more resolved. And with all her limbs intact. 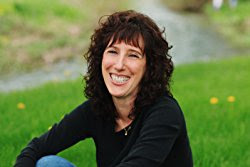 Lynda Schuster is a former foreign correspondent for The Wall Street Journal and The Christian Science Monitor, who has reported from Central and South America, Mexico, the Middle East, and Africa. Her writing has appeared in Granta, Utne Reader, The Atlantic Monthly, and The New York Times Magazine, among other. She lives in Pittsburgh with her husband and daughter.

This is not the kind of book I usually enjoy, I'm not much into memoirs, but I AM a prior military wife and so anything to do with the war overseas interests me.

I am quite glad I read this.  Lynda definitely led a very interesting life, and she takes us along as she moves from spectrum to the other, as a former War Correspondent to an Ambassador's wife.

She has certainly lived a full, interesting and at times dangerous life.  War torn countries, Mexico's financial crisis, rocket fire in Lebanon and so much more.  She tells us about her first husband, a fellow journalist that unfortunately was killed in a guerilla attack, after just 10 months of marriage.

Lynda wanted a change, needed a change and her second husband would provide just that, but not exactly in the sense that she envisioned.  As an Ambassador's wife, she again would be thrown into the middle of chaotic situations.  I especially found it interesting that they had been in Mozambique (the country I was born in).

As a military wife, I'm quite aware that Officer Spouses have classes they need to take in order to know how to act as an Officer's Wife, but I wasn't aware that Ambassador Spouses went through a similar process.  That process didn't quite fit with Lynda that well, and I had to laugh because I often told my husband that if he ever become an Officer, we may have some issues, as I don't like being told what to do, how I should present myself or how to throw a party and so on.  It's just not me.

This was quite a fascinating read, and if you're into memoirs, you may want to add this book to your list.

To help you do that, the publisher is giving away a copy of Dirty Wars and Polished Silver.

Leave a comment down below and be sure to include an email where I can contact you.  Contest is open to US and Canada.

at 7:55 AM
Email ThisBlogThis!Share to TwitterShare to FacebookShare to Pinterest
Filed under: tlc book tours