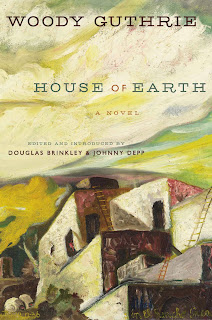 Finished in 1947, House of Earth is Woody Guthrie's only fully realized novel—a powerful portrait of Dust Bowl America, filled with the homespun lyricism and authenticity that have made his songs a part of our national consciousness.

Tike and Ella May Hamlin struggle to plant roots in the arid land of the Texas Panhandle. The husband and wife live in a precarious wooden farm shack, but Tike yearns for a sturdy house that will protect them from the treacherous elements.

Woodie Guthrie began his book in 1946-1947, but then never got around to finishing it.  It was found last year in the University of Tulsa.

Johnny Depp then began his own publishing imprint at Harper Collins and decided to step in, and publish the story.....and here we are today.

I have to say that I quite enjoyed this book, and maybe it's because I love anything to do with homesteading or pioneers, the west, etc.

There were a few things that I didn't quite get, or enjoy.  I mean, the story seems to center on Tike's obsession with having and Adobe house and at first I didn't quite understand why, but having gone back and read the introduction by Johnny Depp and Douglas Brinkley, I now get why this "earth house" plays such an important part.

According to them, Guthrie endured some difficult moments during the Dust Bowl years and after having visited New Mexico and seen their Adobe Houses, he decided that is what he wanted.

at 10:40 AM
Email ThisBlogThis!Share to TwitterShare to FacebookShare to Pinterest