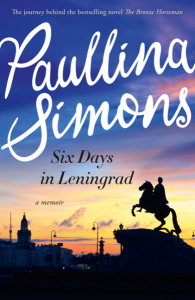 From the author of the celebrated, internationally bestselling The Bronze Horseman saga comes a glimpse into the private life of its much loved creator, and the real story behind the epic novels. Paullina Simons gives us a work of non-fiction as captivating and heart-wrenching as the lives of Tatiana and Alexander.

Only a few chapters into writing her first story set in Russia, her mother country, Paullina Simons travelled to Leningrad (now St Petersburg) with her beloved Papa. What began as a research trip turned into six days that forever changed her life, the course of her family, and the novel that became The Bronze Horseman. After a quarter-century away from her native land, Paullina and her father found a world trapped in yesteryear, with crumbling stucco buildings, entire families living in seven-square-metre communal apartments, and barren fields bombed so badly that nothing would grow there even fifty years later. And yet there were the spectacular white nights, the warm hospitality of family friends and, of course, the pelmeni and caviar.

At times poignant, at times inspiring and funny, this is both a fascinating glimpse into the inspiration behind the epic saga, and a touching story of a family’s history, a father and a daughter, and the fate of a nation.

Paullina Simons is an internationally bestselling author whose novels include Bellagrand and The Bronze Horseman was born in Leningrad in 1963. As a child she immigrated to Queens, New York, and attended colleges in Long Island. Then she moved to England and attended Essex University, before returning to America. She lives in New York with her husband and children.

I've often wondered how authors get inspired, how they do research or what drives them to write the stories they do.  In Six Days in Leningrad, I actually got to see a bit of that process as I followed Paullina Simons and her dad on a trip to the place of her birth.

The book title actually refers to the six days she spent in Russia doing research for her book The Bronze Horseman.

I love history, I love memoirs and I think in this book you get a little of both, plus it feels like we've traveled to Russia and learned a bit more about the country.  To be honest the only real stories I've ever heard about Russia have not been exactly positive, it tends to instill a sort of fear into people.

I guess for the author it was sort of the same thing.  She left when she was very young, immigrating to the States and more specifically New York.  She had never returned, nor did she ever feel the yearn to do it, so when her father asks her to accompany him to the place of her birth, she tells herself that it's just for research.

Thing is, when they arrive, she is hit with wave upon wave of emotion.  She is forced to face her past, to walk the streets of Leningrad, to see the deplorable way in which some families still live to this day.  Mind you this is not the current Russia, this was back in 1998, but it still gives you a pretty good idea of the comparison between the pretty and flashy and the parts of Russia still trying to recover from Communism.

I so enjoyed this book, because as with many other memoirs or historical fiction, it sets me on a path to research.  I find myself putting the book down and opening google to look up a place, see it's images, try to place myself there and learn more about it's history.

I don't think many people understand the devastating history of Russia, but it's well worth a read.
at 12:21 AM
Email ThisBlogThis!Share to TwitterShare to FacebookShare to Pinterest
Filed under: tlc book tours