Blame it on the Cowboy - TLC Book Tour 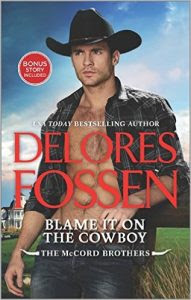 Every cowboy has a wild side—all it takes is the right woman to unleash it…
All of Logan McCord’s carefully laid plans erupt the day he walks in on his would-be fiancée getting…well, not so carefully laid. Tonight, just once, Logan is acting on instinct. And that instinct is telling him to say “Happy to oblige” to the cute stranger looking for a no-strings fling with a Texas cowboy.
When chef Reese Stephens made her bucket list, she mistakenly thought she had weeks to live. Not that she regrets her one-night-stand with the gorgeous rancher. But she does regret leaving an heirloom watch as a parting gift. Tracking Logan down is easy. Walking away again is another matter. Because Reese’s crazy past and Logan’s battered heart are no match for the kind of chemistry that could turn one night into the start of a passionate lifetime.

USA Today bestselling author, Delores Fossen, has sold over 70 novels with millions of copies of her books in print worldwide. She’s received the Booksellers’ Best Award, the Romantic Times Reviewers’ Choice Award and was a finalist for the prestigious Rita ®. In addition, she’s had nearly a hundred short stories and articles published in national magazines.
.

This is the last in the McCord Brothers trilogy.  Unfortunately for me, I hadn't read the previous two books, but I didn't feel like I was completely lost on who was who.

Cowboys?  I think all women have this special little spot in their hearts for a good ol' country boy, especially a cowboy.  Right?

Well Logan is the epitome of a cowboy, he is good looking, he is a rancher and he is hard working.  Having found his fiancee in a compromising situation, he is quick to try and drown his sorrows in a local bar, and that is when he meets Reese.  She makes him an offer he can't refuse and they spend the night together.  No strings attached!!!

Problem is that a few months later, Reese is back in town looking to get something she left with Logan during their one night stand.  See she thought she was dying and had compiled a bucket list, of which one item consisted of the hot night stand she shared with Logan.

Much as they want to avoid it, the chemistry between the two is through the roof and there's no way that they will let the other out of their sight....problem is that around this time, is when Logan's ex fiancee decides to make a comeback and a play at getting him back.

This story was so much fun to read, between the awkward moments between the two trying to convince themselves that there's nothing there, to the towns people running their mouths, and some very funny laugh out loud moments.

I do wish I had read the two previous books in the trilogy, maybe I need to find them and do just that.