A few weeks ago, my husband and I were at Walmart and he surprised me with an Air Fryer.

I know that sounds a little strange that we were there and he surprised me, but he really did, we were getting ready to leave the store and he took me back to the aisle and told me to pick the one I wanted.  I have wanted an air fryer for so long so this was quite exciting.

I've heard about air fryers for a few years, the first time was actually through a blog from Portugal, and I found the whole process of frying without oil, quite fascinating.

We don't eat a lot of fried foods as it is, but knowing that when we do, I can make it much healthier for my family, is enough to make me dive right in to this new fascination that everyone is talking about.

I was going to get just a very simple model, but as we looked through all that was available, we both decided on the Power AirFryer Oven. 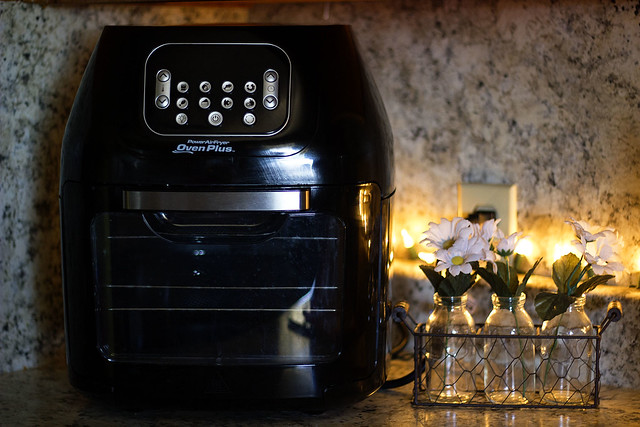 This simple machine, takes the place of many other appliances in your kitchen.

Ok, so I know that I will still use my oven and microwave and toaster and so forth, especially when preparing big meals, but for smaller portions, this works just fine.

One of the reasons we picked this one, aside from replacing a lot of the other appliances, is that one of the things it does is Dehydrate food.  When we moved from Arizona to Idaho after retiring from the Air Force, the moving company broke our dehydrator and we just never got around to replacing it.

That was one of the first selling points for picking this fryer over the others available.

So you may be wondering, what exactly does it replace, what can it do and so on.

I'll tell you.  It replaces the Deep Fryer, Rotisserie Oven, Dehydrator, Oven, Toaster Oven, Pizza Grill and Microwave......this thing even BAKES, though I have not tried that feature yet.

I could not wait to get home and start playing around with it.  And that's one thing you need to take into account right away, the directions and the different button settings and temperatures and times, are there to give you a basic idea of how long something will take to cook.

As with any other appliance, you will have to play around with it and try different settings, different times of cooking and temperature etc.  It's all a learn as you go, at least for me it is. 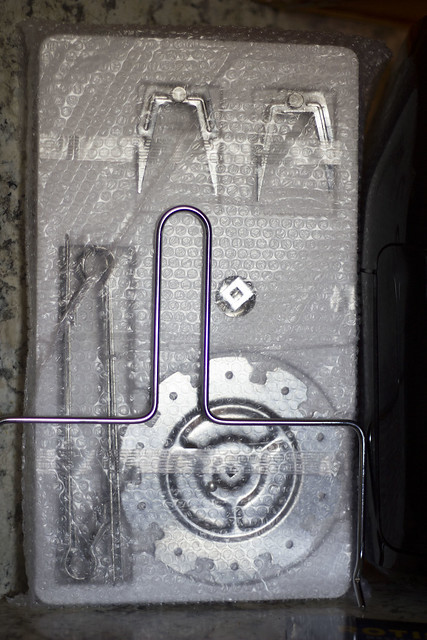 The price at Walmart was $125, which I didn't think was very expensive for everything that comes with it or all that it does.

It brings a bunch of accessories, as you can see above, the fetch tool which is that metal hook kinda thing, and that is used to grab the inside trays to remove them when cooking.

It also brings a Rotisserie set (one shaft, two forks and two screws). 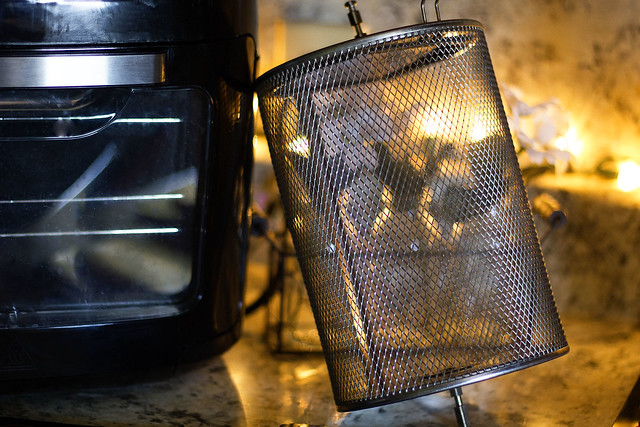 This is the rotating mesh basket which is used for fries or I guess anything really that you want to try in there.  I'm going to try popcorn chicken or pizza pockets since they're small enough. 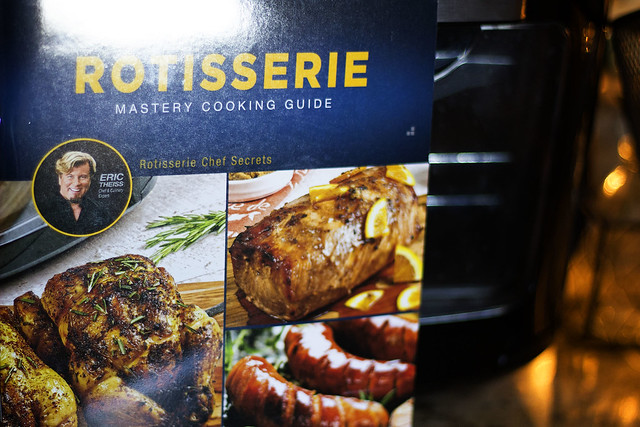 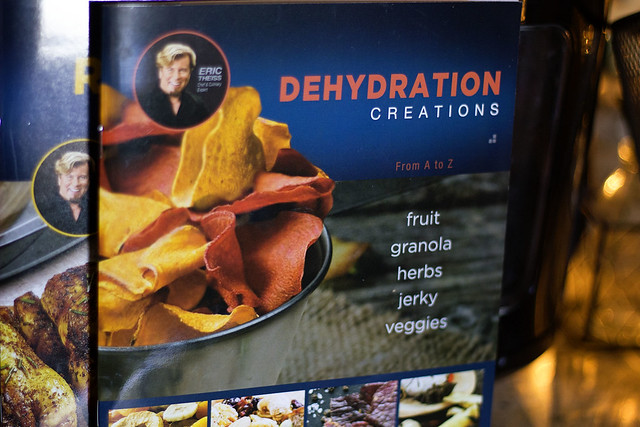 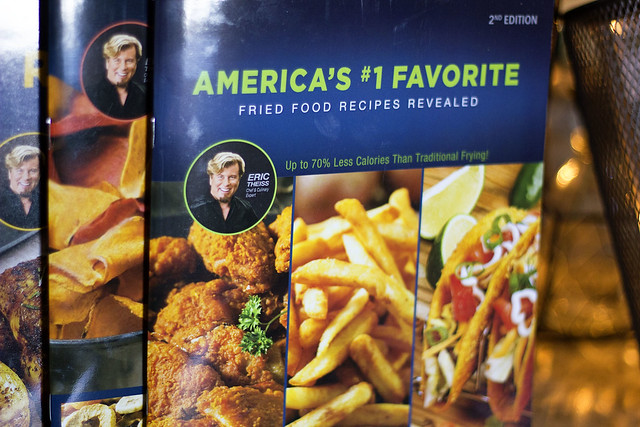 It also brings 3 small cookbooks with quite a few recipes to try. 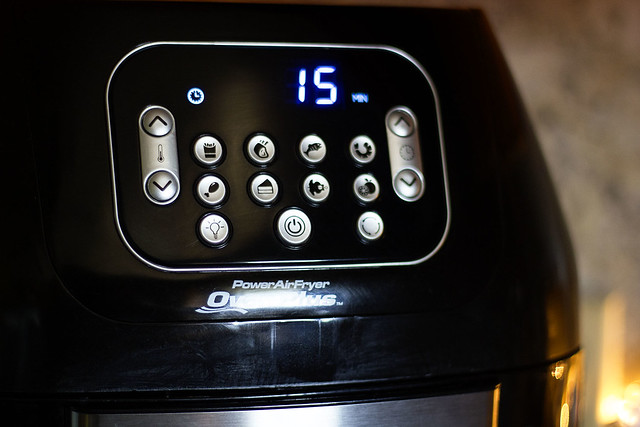 The fryer itself comes with 3 baking trays and a drip basket at the bottom to catch any crumbs or liquids or anything.

I find it so fascinating to watch he food cooking in there and know that it's free of oil and so much healthier.

The screen is very easy to work with and as you can see, you have a ton of presets, but that doesn't mean that it will always take just that amount of time.

For example, with the fries, I click the fry button and it immediately sets the temperature to 400 and the time to 15 minutes, but I found that they need about 5 minutes more.  The result though was fantastic, super crispy, non greasy and delicious fries.  It's our favorite way of eating fries now. 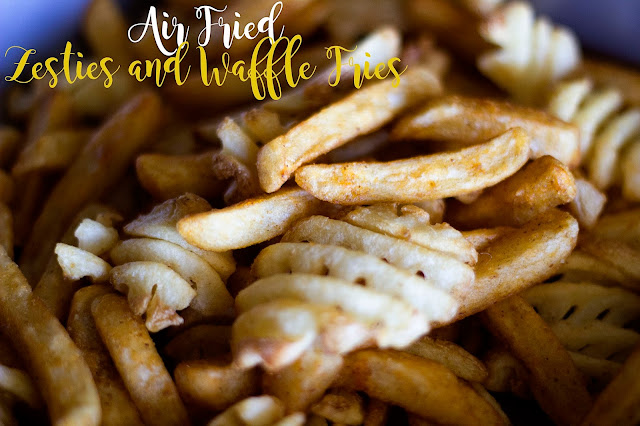 I haven't made a lot of things in the fryer yet, but the ones that I have, we've all really enjoyed and I think it's going to become one of my favorite kitchen gadgets.

So what exactly have I made???

Well to begin, we only make bacon in this air fryer now.  We  had to work around with the settings a bit, and adjust the time here and there, but for the most part, we just set it to 15 minutes, switch the trays around once in a while and end up with some of the yummiest bacon, and you can let it go until it's nice and crispy too. 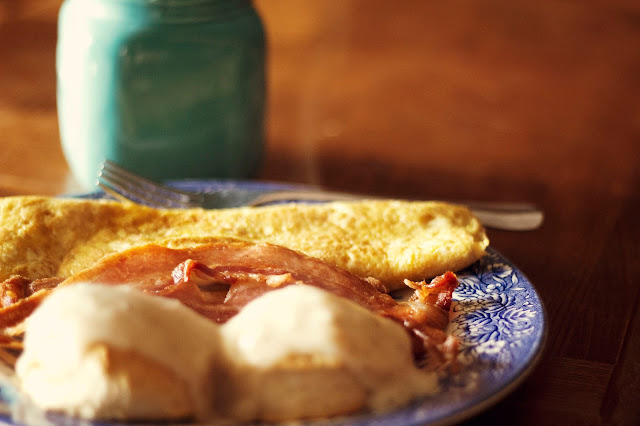 The next thing I have made in the Air Fryer, were banana and apple chips.  The dehydrator was of course, the first thing that made us want this model, so I couldn't want to give it a try and see if it would really work. 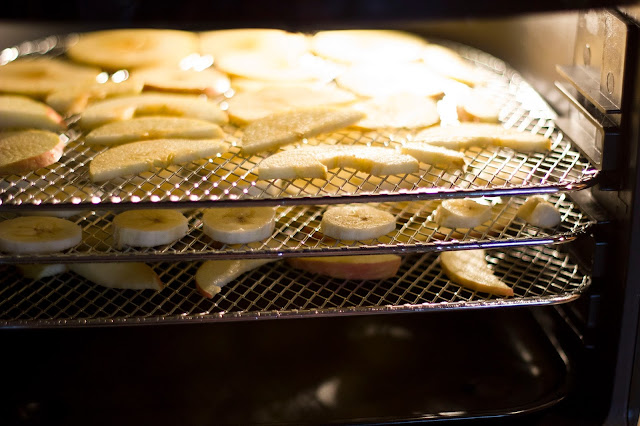 I used the recipe guide in the cookbook that came with it.  It worked for the most part, but I think next time I need to let it dehydrate for longer because they weren't quite as crisp as I would have liked them.  They tasted fantastic though.

So again, just an example of how I need to adjust cooking time or temperature to my liking. 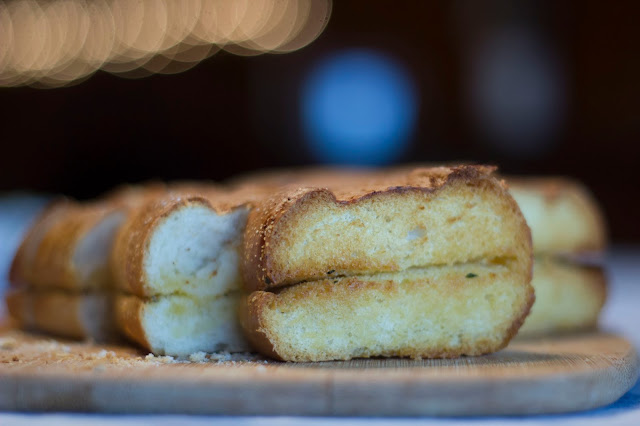 I've also made garlic bread using the oven setting and it was SO GOOD.  It came out super crispy and crunchy, we loved it.

I grilled some sausages as well that turned out really well too.

Grilled Cheese in the Air Fryer is DELISH.  There's nothing to it, make the grilled cheese sandwich as always, then pop it into the Air Fryer at 370 degrees for 8 minutes, make sure to flip over halfway through.  So yummy!!!

Obviously, I can't speak for everyone else, and there's always going to be people who don't like the air fryers or think it's pointless or useless.  Our family loves ours and I intend to try many more recipes and give all the features a go.

I still want to try baking a cake in there, I want to make some beef jerky in the dehydrator, make some rotisserie chicken and some beef kebabs and many other things.

Of course I'll share with you my adventures as I continue using it.

So, all in all, we are very happy with our purchase.  I hope this helped you in some way, but if you have any other questions feel free to leave them below and I'll answer them to the best of my ability :)

Again, this is the Power AirFryer Oven, and we got ours at Walmart but I know you can purchase it in many other stores, or just get it directly from the website.
at 11:33 AM
Email ThisBlogThis!Share to TwitterShare to FacebookShare to Pinterest
Filed under: power airfryer oven