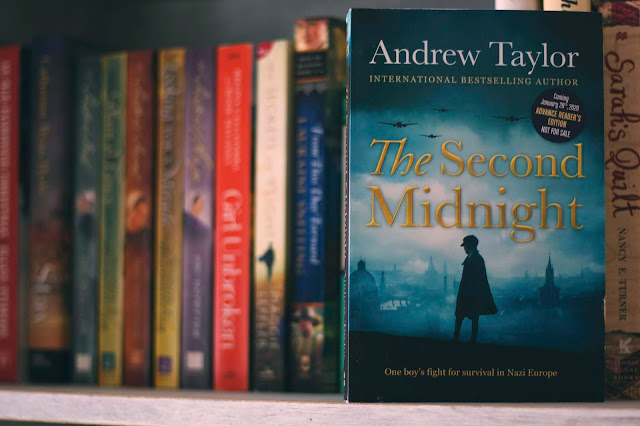 A secret mission…
1939. As Europe teeters on the brink of war, Alfred Kendall is tasked with carrying out a minor mission for the British Intelligence Service. Travelling to Prague, he takes his troubled young son, Hugh, as cover.

A terrible choice…
When Hitler invades Czechoslovakia, Alfred is given an ultimatum by the Czech Resistance. They will arrange for him to return to England, but only if he leaves his son Hugh behind as collateral.

A young boy stranded in Nazi terrain…
Hugh is soon taken under the wing of a Nazi colonel – Helmuth Scholl. But even though Scholl treats Hugh well, his son, Heinz, is suspicious of this foreigner. And as the war across the continent intensifies, they are set on a path that will ultimately lead towards destruction…

Andrew Taylor is the author of a number of crime novels, including the ground-breaking Roth Trilogy, which was adapted into the acclaimed TV drama Fallen Angel, and the historical crime novels The Ashes of London, The Silent Boy, The Scent of Death and The American Boy, a No.1 Sunday Times bestseller and a 2005 Richard & Judy Book Club Choice.

He has won many awards, including the CWA John Creasey New Blood Dagger, an Edgar Scroll from the Mystery Writers of America, the CWA Ellis Peters Historical Award (the only author to win it three times) and the CWA’s prestigious Diamond Dagger, awarded for sustained excellence in crime writing. He also writes for the Spectator and The Times.

He lives with his wife Caroline in the Forest of Dean.

My thoughts:
If you love thrillers, more precisely historical spy thrillers that take place in World War II time, then this is the book for you.  No jokes!!!

You have got to pick yourself up a copy and start reading right away.  (you can find links to purchase the book, above)

All the book reviews I've done lately have been about, or taken time during World War II, which is brilliant, it's an era I love reading about.

In The Second Midnight we meet Alfred Kendall and his young son Hugh.   A father and son, not always getting along well, which is to be expected when you have a young spirited, but albeit troubled young boy who has just been expelled from his boarding school.  Things need to change, and Hugh's father Alfred finds the perfect opportunity when he is sent by the British Intelligence, on a small mission, or so they say.

Unfortunately this happens to coincide with the time that Adolf Hitler is invading Czechoslovakia.  The only way Alfred can get out alive is by making the choice to leave behind his young son.

Maybe being a parent myself, I had a hard time seeing how this would ever have even crossed my mind, but I guess when people find themselves cornered they will do whatever they can.  I still would never have been able to leave my 12 year old behind in a war torn country, but that is just me.

Hugh is left to his own devices, he goes into survival mode and ultimately saves the life of a high ranking colonel, who in turn takes him into his family and raises him as one of his own.

The novel not only touches on the brutality of World War II, but the intricacies of relationships and the spirit of survival.

I loved every page, and was super excited to find out that it is part of a series, being the first in the Blaines Book Series.  I'll be interested to read the remaining two books and hopefully enjoy them as much as I did this one.


Thank you to TLC Tours and the publisher for providing me with a review copy of this book, in exchange for my honest review.

at 3:24 PM
Email ThisBlogThis!Share to TwitterShare to FacebookShare to Pinterest
Filed under: tlc book tours