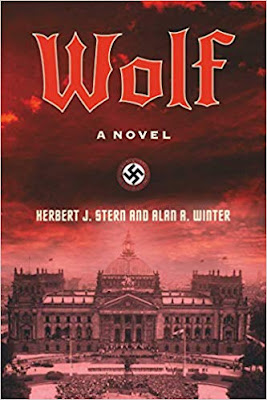 In the Great Tradition of Herman Wouk, Author of Winds of War and War and Remembrance, Wolf is a Thoroughly Researched and Illustrated Historical Novel about a Man who is Not Yet a Monster . . . but Will Soon Become the Ultimate One: Adolf Hitler.

Perhaps no man on Earth is more controversial, more hated, or more studied than Adolf Hitler. His exploits and every move are well-documented, from the time he first became chancellor and then dictator of Germany to starting World War II to the systematic killing of millions of Jews. But how did he achieve power, and what was the makeup of the mind of a man who would deliberately inflict unimaginable horrors on millions of people?

Meet Friedrich Richard, an amnesiac soldier who, in 1918, encounters Hitler in the mental ward at Pasewalk Hospital. Hitler, then a corporal, diagnosed as a psychopath and helpless, suffering from hysterical blindness, introduces himself as Wolf to Friedrich and becomes dependent upon Friedrich for assistance, forming an unbreakable bond between the two men.

Follow Friedich—our protagonist—who interacts with real people, places, and events, through the fifteen-year friendship that witnesses Hitler turn from a quiet painter into a megalomaniacal dictator.

Using brand-new historical research to construct a realistic portrait of the evolving Hitler, Wolf will satisfy, by turns, history buffs and fiction fans alike. And as this complex story is masterfully presented, it answers the question of how a nondescript man became the world’s greatest monster.

Herbert J. Stern, formerly US attorney for the District of New Jersey, who prosecuted the mayors of Newark, Jersey City and Atlantic City, and served as judge of the US District Court for the District of New Jersey, is a trial lawyer. He also served as judge of the United States Court for Berlin. There he presided over a hijacking trial in the occupied American Sector of West Berlin. His book about the case, Judgment in Berlin, won the 1974 Freedom Foundation Award and became a film starring Martin Sheen and Sean Penn. He also wrote Diary of a DA: The True Story of the Prosecutor Who Took on the Mob, Fought Corruption, and Won, as well as the multi-volume legal work Trying Cases to Win.


About Alan A. Winters

Alan A. Winter  is the author of four novels, including Island Bluffs, Snowflakes in the Sahara, Someone Else’s Son, and Savior’s Day, which Kirkus selected as a Best Book of 2013. Winter graduated from Rutgers University with a degree in history and has professional degrees from both New York University and Columbia, where he was an associate professor for many years. He edited an award-winning journal and has published more than twenty professional articles. Alan studied creative writing at Columbia’s Graduate School of General Studies. His screenplay, Polly, received honorable mention in the Austin Film Festival, and became the basis for Island Bluffs.

If I was asked to describe this book in one word, that would be it.

I love, and mean love history.  To learn about where we came from, how we evolved, and to learn about some of the most fascinating time periods in our lifetime, is something I truly enjoy.

There are eras I love more than others, like anything Tudor and WWI and II, and there are events that have forever marked me, things I can never wrap my brain around or being to comprehend.  Adolf Hitler and the atrocities and horrors he committed against the Jewish people, is one of those that send shivers down my spine.

When I first received Wolf in the mail, I set it aside aside and my kids actually saw the book, looked at the cover and both remarked "Wow mom, are you reading a book about Hitler?  That's weird, we know how you feel about what he did."

They weren't wrong, and perhaps that is the reason I decided to review this book to begin with.  Though in no shape, way or form do I condone what he did, I have always been interested and fascinated by everything surrounding the person he was and what could have possibly led him to become the evil man he became.

In Wolf we are allowed an inside perspective into his mind, and maybe just a little insight into who he was deep down, behind that well recognized mustache and persona.

The story begins with a young soldier waking up in a mental hospital in Germany.  He has no idea who he is, what his name is, where he came from or how he ended up in the hospital.  The doctors and nurses have no real information for him either.  From the very beginning, he bonds with his nurse Anna, a sweet woman who lost her husband to the war.

The young man is covered in bandages, his face having been reconstructed.  Not even the doctors know what he looked like as there was no identification on him when he was brought into the hospital.

From that moment, he learns that he has no clue what he looked like prior to that day.  During one of his sessions with the hospital psychiatrist, he is given the name of Friedrich Richard.  A name that belonged to a soldier who has since passed.  It i all done with the idea that in time, when his amnesia disappears, he can go back to his old life, his true identity and pick up where he left off.

While still recovering in the hospital, a new patient comes in.  Someone he is not very interested in being friendly with at first, but after a bit of a push by Anna and other hospital staff to help the blind soldier in the bed next to him, he quickly forms a friendship.

The patient goes by the name Wolf.

Not until Friedrich is out of the hospital and in Berlin, trying to restart a life, does he come to find out who Wolf really is.  His real name?  Adolf Hitler.

The two men form a huge bond and for the next 15 years, Friedrich comes to know the man who would become infamous for the genocide of millions of Jews.

Watching Friedrich struggle with right and wrong, on one hand wanting to do his friend's bidding, and being almost like his right hand man, to realizing that Jews are not the enemy, keeping friendships with Jewish people and even finding out that the name he was given of Friedrich Richard, belonged to a Jewish soldier fighting for Germany.

I could go on and on and on, but I don't want to give away anything from this book.  It is so well written and researched, and truly gives you a look into the inside mind of one of history's most evil, dangerous man.

If you are a history fan, you will no doubt love Wolf.

at 6:31 PM
Email ThisBlogThis!Share to TwitterShare to FacebookShare to Pinterest
Filed under: tlc book tours

Good morning everyone!   Welcome back to my blog and our Happy Homemaker Monday feature.  I hope you've had a great weekend, ours was wo...