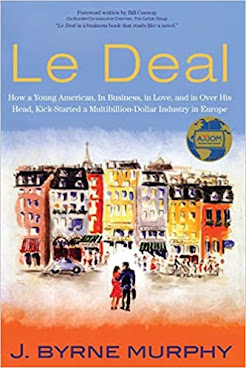 Le Deal is a business adventure story involving raw entrepreneurship and high-level politics. It is the true story of Byrne Murphy, a young businessman who abruptly moves to Paris in a quest to reignite his career and his fortunes. He quickly finds himself up against powerful forces, including wrestling with the Prime Minister of France, the soon-to-be Chancellor of Germany and wanna-be mafia in Italy. There are also charming encounters with the British Royal Family, including a near royal embarrassment of epic proportions.

Eight years after Byrne’s company, McArthurGlen Europe, was launched in his hotel room, it generated approximately $1 billion in sales from 11 centers across Europe; created nearly 8,000 jobs; opened 1,500 stores featuring 500 brands; attracted nearly 40 million shopping visits per year and spawned an array of competitors. In short, an industry was born.

Along the way, the author learns what he, and Americans in general, do and do not know about life beyond our borders. The book offers a message for Americans who work internationally to truly take “context” into account; to realize, in our quest to accomplish more in less time, that investing the time to understand the nuances of the foreign cultures we are dealing with is key to prospering in our twenty-first-century multicultural, polyglot, interconnected, globalized world.

Please use the hashtag #LeDeal, and tag @tlcbooktours and @lyonspress.

J. Byrne Murphy was one of the founders and Deputy Chief Executive of McArthurGlen Europe. He spent eight years in an ultimately successful struggle to implant the concept of designer outlet centers in Europe, featuring brands ranging from Gucci and Prada to Polo and Nike. Murphy is an entrepreneur who has started up several European ventures. Recently these have included a data center operation in Scandinavia, and the redevelopment of a fifteenth-century Medici palazzo in Florence, Italy, into one of Europe’s first private residence clubs. He is a cum laude graduate of Harvard and received his MBA from the Darden School of Business at the Universtiy of Virginia. After living in Europe for twelve years, Murphy now resides in the Washington, D.C. area with his wife, Pamela and their four daughters.

Find our more about him at his website.
REVIEW:
I have always aimed to be completely honest with the book reviews I do.  And so, I have to tell you the truth on what I though about Le Deal by J. Byrne Murphy.
I will start by telling you that if you love non fiction, sorta biography books about entrepreneurship and so forth, then you will most likely really enjoy this book.
I on the other hand, am not a huge fan, although some books of this genre have caught my attention.
I would love to tell you that I read Le Deal all the way through, that I found it very interesting and fascinating, but unfortunately it just didn't do it for me.
The theme itself is interesting, Byrne Murphy, moves to Paris abruptly, taking with him his wife and daughter.  His plans are to reignite his career, make a huge change, and kick start a different kind of life.   Though his company becomes majorly successful, he does encounter many struggles, red tape, politics and all of that kind of shenanigans.
Maybe because I am on politics overload at the moment, I just couldn't get into the book.  So unfortunately for me, this one did not get 5 stars.  But, as I said, I'm speaking for myself, not for anyone else, and I'm sure many out there will thoroughly enjoy this journey that Byrne Murphy takes us on.
Thank you to TLC Tours and Lyons Press for providing me with a review copy.  All opinions and thoughts are my own.
at 8:51 AM
Email ThisBlogThis!Share to TwitterShare to FacebookShare to Pinterest
Filed under: tlc book tours