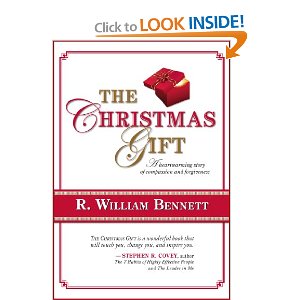 Every school has its legend; Ben Jackson was Maple Grove Elementary's. He has been held back five years in a row; he was exposed to nuclear radiation as a child; he was raised in the woods by bears. So went the many assessments of Ben Jackson by his sixth-grade peers. Over-sized and under-niced , Ben was the school bully. As the school year begins, new student Scott stands up to Ben, and as a result, becomes Ben s new daily target. From the annoying comments to the humiliating pranks, Ben assures a day doesn't pass without making Scott's life miserable. But in this story of forgiveness, tolerance, and unconditional love, both Scott and Ben make a remarkable transformation that will leave you with a fresh understanding of the meaning of Christmas in your life.

To say that this book touched my heart would definitely be an understatement. Yes I know that I often say that about a particularly good book but I'm not putting it lightly when I say that this book was one which will forever leave a mark on my heart, might be because it came at the perfect time when I can actually relate to some of the things in the story.  Not directly but through my daughter who is in sixth grade, the same grade that the two boys in the book are in.

It also deals with something she's been having to endure and which I've talked about at length here on my blog.....bullying.

It's a quick read and I found myself enthralled with the story, page after page this book warmed my heart but it also taught me a lot, it made me stop to question myself, my choices and actions towards others.  It touches on the lessons of forgiveness and understanding, and the biggest for me was the reminder that doing the right thing isn't always about doing the easy thing, matter of fact, the right thing often means going out of your comfort zone and putting yourself in a vulnerable position.  But in the end, it's the relief that comes with it that matters, guilt can become such a heavy burden on your heart.

I highly recommend this book, I think it should be read by all in the family and especially teens who may be in the same grade, I'm definitely passing it on to my daughter.


Thank you to the publishers for providing me with a copy for this review.  The opinions and thoughts are solely mine.
at 8:44 PM
Email ThisBlogThis!Share to TwitterShare to FacebookShare to Pinterest
Filed under: book review