{ You and Me and Us by Alison Hammer - TLC Book Tour } 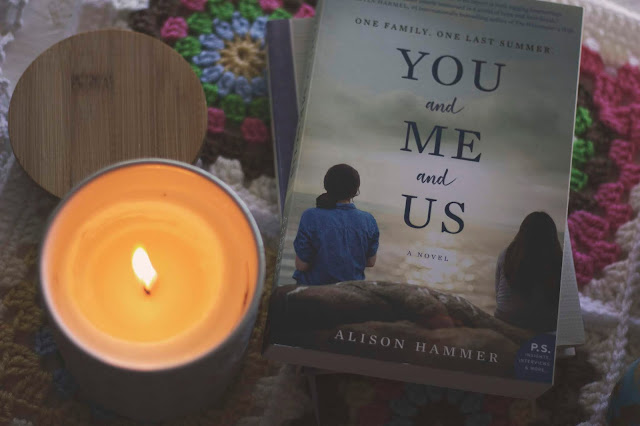 “Hammer is an expert at both tugging heartstrings and keeping the reader utterly immersed in a world of hope and heartbreak. A great new voice in women’s fiction.”– Kristin Harmel, #1 international bestselling author of The Winemaker’s Wife


The heartbreaking, yet hopeful, story of a mother and daughter struggling to be a family without the one person who holds them together—a perfect summer read for fans of Jojo Moyes and Marisa de los Santos.

Alexis Gold knows how to put the “work” in working mom. It’s the “mom” part that she’s been struggling with lately. Since opening her own advertising agency three years ago, Alexis has all but given up on finding a good work/life balance. Instead, she’s handed over the household reins to her supportive, loving partner, Tommy. While he’s quick to say they divide and conquer, Alexis knows that Tommy does most of the heavy lifting—especially when it comes to their teenage daughter, CeCe.

Their world changes in an instant when Tommy receives a terminal cancer diagnosis, and Alexis realizes everything she’s worked relentlessly for doesn’t matter without him. So Alexis does what Tommy has done for her almost every day since they were twelve-year-old kids in Destin, Florida—she puts him first. And when the only thing Tommy wants is to spend one last summer together at “their” beach, she puts her career on hold to make it happen…even if it means putting her family within striking distance of Tommy’s ex, an actress CeCe idolizes.

But Alexis and Tommy aren’t the only ones whose lives have been turned inside out. In addition to dealing with the normal ups and downs that come with being a teenager, CeCe is also forced to confront her feelings about Tommy’s illness—and what will happen when the one person who’s always been there for her is gone. When the magic of first love brings a bright spot to her summer, CeCe is determined not to let her mother ruin that for her, too.

As CeCe’s behavior becomes more rebellious, Alexis realizes the only thing harder for her than losing Tommy will be convincing CeCe to give her one more chance.

You and Me and Us is a beautifully written novel that examines the unexpected ways loss teaches us how to love.

Founder of the Every Damn Day Writers, Alison Hammer has been spinning words to tell stories since she learned how to talk. A graduate of the University of Florida and the Creative Circus in Atlanta, she lived in nine cities before settling down in Chicago, where she works as a VP creative director at an advertising agency. You & Me & Us is her first novel.
Find out more about Alison at her website, and connect with her on Instagram, Twitter, and Facebook.

The very first novel from this new author is set to skyrocket and no doubt find herself many fans along the way.

You and Me and us tells the story of a family of three.  Tommy the father who has been dealt a huge devastating hand, in the form of terminal cancer.  His wife Alexis is a hard working woman who built her own advertising agency from the ground up.  Day in and day out, she has thrown herself into her work and indirectly unbalanced the home/work relationship.

And then we have CeCe the teenager, close to her father, estranged from her mother and going through all the teenage ups and downs that are so intricate to tackle.

When Tommy's diagnosis comes in, Alexis realizes that the one person who has picked up the slack at home, taken over the house responsibilities and in essence raised their daughter, is slowly slipping away.  All he wants is one last summer with his wife and daughter.  That should be simple to do right?

Alexis has to put aside her company and take over the reigns again from Tommy, but that doesn't come as easily for her, especially when it comes to their daughter, who has since become estranged from her mom, their relationship precariously close to completely falling apart.

Alison Hammer has managed to write a story that is devastatingly sad but beautiful told through the eyes of all parties involved.  As a parent of a 21 year old and a 17 year old, there were so many moments that I related to Alexis and CeCe's issues, but there were also moments where I wanted to shake Alexis and tell her to stop being so selfish, to own up to her responsibility in the destruction of the bond between mother and daughter and to try harder.

CeCe wasn't without fault either, but then she's at that age.

What an absolutely moving story of love, family, bonds, compassion and growing through a devastating tragedy.   I can not wait for another book from this brilliant new author, and I surely hope I don't have to wait very long.

at 3:33 PM
Email ThisBlogThis!Share to TwitterShare to FacebookShare to Pinterest
Filed under: tlc book tours