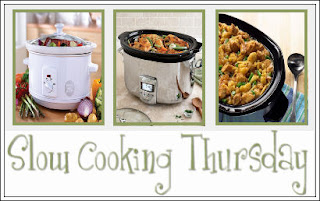 Don't forget to add your name to Mr Linky and a link back to your SCT post so others can come by and see your recipe too.
As always, share your slow cooking recipes but if you REALLY REALLY don't have one and still want to participate, then you can share any kind of recipe.

1. Place half of the bratwurst in the bottom of a 5 quart slow cooker. Arrange half of the green pepper, red pepper, and onion over them. Layer the remaining bratwurst over the top, and top with the remaining red and green bell peppers and onion. Throw in the garlic and bay leaves. In a separate bowl, mix together HALF of the honey mustard sauce, liquid smoke and beer. Pour into the slow cooker. Add more beer if necessary to cover everything in the pot. Cover, and cook on Low for 4 to 5 hours.
2. Preheat an outdoor grill for high heat, and lightly oil grate. Remove bratwurst from the slow cooker, but leave onions and peppers inside. Place bratwurst on the grill and baste with some of the remaining honey mustard sauce. Turn occasionally until slightly charred.
3. Place bratwurst on rolls, and use tongs to pull out a few of the onions and peppers from the slow cooker and drape them over the sausage. The onions and peppers are very tasty so don't forget this part!

at 2:00 AM
Email ThisBlogThis!Share to TwitterShare to FacebookShare to Pinterest
Filed under: Slow Cooking Thursday