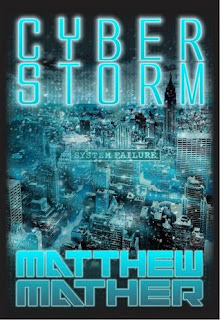 Author: Matthew Mather
Rating: ★ ★ ★ ★ ½
Genre: Techno-Thriller, Science-Fiction
Publication Date: 15 March 2013
Synopsis: Sometimes the worst storms aren't from Mother Nature, and sometimes the worst nightmares aren't the ones in our heads. Mike Mitchell, an average New Yorker already struggling to keep his family together, suddenly finds himself fighting just to keep them alive when an increasingly bizarre string of disasters start appearing on the world's news networks. As the world and cyberworld come crashing down, bending perception and reality, a monster snowstorm cuts New York off from the world, turning it into a wintry tomb where nothing is what it seems, and no one can be trusted...

I honestly didn't know what to expect when I first started reading the book.  What I DID know was the the synopsis intrigued me, especially since it's about a subject that my husband and I often talk about.  What if????
I often say that we're so dependent on the internet and wifi and more and more, people don't know how to survive without it.

Usually I steer clear of this type of book genre, mainly because I find the books quite boring and can't quite seem to stay interested.

This one, was completely different for me.  I opened the book on my Kindle and read the first two pages and was hooked, I couldn't put it down.  It's written so well, and in such a way that it just flows from page to page, it seems natural, as if I'm standing right there with the characters and can actually see them saying and doing the things they're doing.

It also frightened me because it touches on a subject that is so real and could easily happen.

The story takes place in New York and the main character Mike Mitchell, is struggling to keep his family together. And then the internet starts going nuts and reports start coming in that websites are being hacked and defaced and that a code intended to knock out the power grid has been embedded in the power plants and everything seems to be pointing to China...but in the midst of this all people start dying from a supposed bird flu.....and if that wasn't enough, a crazy storm hits New York, and the city finds itself cut off.

Everything is falling apart, his whole world is unraveling before his eyes, and soon he finds himself, along with his wife and son, and their neighbors, fighting to survive in a world that is essentially shutting down.   Who do you trust, where do you go, what do you do to keep those you love safe?

We are faced with desperation, with what people will do to stay alive, to find water, to find heat, to find food. The lengths they will go through for a small amount of food.

It's scary, and there's moments that I almost felt like I wanted to reach through the book and help them, like I was watching from a distance and completely helpless.

That is how good Matthew Maher is in telling this story. He builds the suspense, he makes you care, he takes you right to the middle of the story and you can't help but go along, enthralled and caring and rooting for these people to make it.

I am definitely recommending this book to my friends, and as a matter of fact, my husband has just started reading it too and is already enjoying it. If you love a good science fiction, thriller kind of book, you HAVE to read this one.

You can also grab a paperback version, as well as e-book versions for all other platforms.


Here are some interesting developments:

Cyberstorm has been steadily rising to #3 in its techno-thriller sub-category on Amazon.

Matthew Maher wrote an interesting article on the merger of outer space and cyberspace for the (serious, NASA-targeted and non-fiction) magazine Space Quarterly.


Thank you Matthew Maher for sending me a copy to review.

at 8:53 PM
Email ThisBlogThis!Share to TwitterShare to FacebookShare to Pinterest