Those words, oh my goodness, those words hit me like a ton of bricks.
Today, Thursday, September 16, 2021, I officially became an American Citizen, after taking my Oath of Allegiance.
I think for so many that are born in this country, and privileged to be born here, they don't understand the magnitude of becoming a citizen to the most powerful nation in the world.  You are born here, and that's that.
But take if from someone who was born elsewhere, and lived in multiple countries before making America my home, I only wish you understood the blessing that it is, to be called American.
I pray you never have to live in a communist country. I pray you never have to live in a country where there is no freedom of speech, where you can't say what you think, can't express how you feel, and don't have the freedoms that are taken for granted on a daily basis.  I have, and I came to the United States for a better life.
See, when you have never had to live differently, never been on the other side looking in and hoping and wishing and dreaming of becoming an American, you will never understand.
For me, this means everything. This means respecting this beautiful flag, pledging to protect it from all enemies foreign and domestic, and if ever need be, taking up arms. 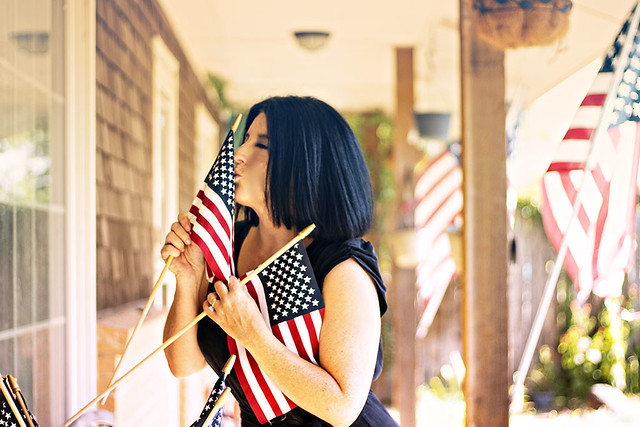 I don't make those promises lightly and neither did the other 28 people who became citizens along with me. We took the Oath, we cried, we congratulated each other and walked out with the biggest smiles on our faces, our throats choked by tears.
We held onto the envelopes handed to us, containing a flag, a copy of the Declaration of Independence and the Constitution, a form to register to vote and a form to apply for an American passport.
We clutched those belongings, as if they were made of gold, because to us, they are just as valuable, and actually even more so.
After 23 years I can finally say that I am a PROUD American Citizen, and you better believe that I will love this flag with all my heart, as I have been for so long.
For some it's become just a piece of cloth with no meaning.  For me?    It is EVERYTHING, it is freedom, it is a better life, it is opportunity, it is my home, and above all, it is God's nation.
So thank you Lord, thank you for this blessing, I am beyond grateful and ecstatic to be able to say that I AM AN AMERICAN CITIZEN!!!

at 6:54 PM
Email ThisBlogThis!Share to TwitterShare to FacebookShare to Pinterest
Filed under: american citizen, life