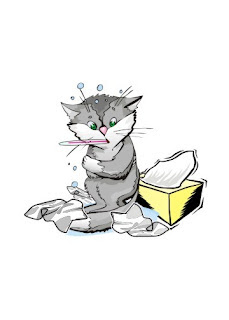 At least the sore throat is gone but I have the sniffles and my sinus is having a field day, but what is new right??? I should be the poster child for sinus issues!

Nicholas is still sick, he sounds like he's been hitting the whiskey bottle, his nose is running a mile a minute and his eyes are red from not sleeping well, poor thing....I just hope it all goes away soon.

So we have 2 weeks left in this house, I didn't think I would be saying those words so soon, it feels like just yesterday I was breaking news that we got orders to another base, now the move is upon us and I'm excited and sad and nervous and a bunch of other things.

It's such an overwhelming feeling to know that in just a short time you will be driving away from the house you've been in for 9 years, have built memories, had children, had ups and down and joys and sorrows...and it's not to say that our new house won't become the same for us over the years....but it's just sad to leave this one behind.

But moving on, I tried to visit as many blogs as I could for the Menu Plan Monday, but good grief who has time to go see over 100 blogs??? I certainly don't, so I saw about half of them and will leave the rest for later. In the meantime if you want to my menu for this week, just head over to "Full Bellies Happy Kids".

So last night Curt and I were watching tv, the History Channel, and there was this very interesting show called "Last Days on Earth".

Could the human race become suddenly extinct? We count down seven ways in which the world as we know it could meet an abrupt and untimely end, from a mammoth asteroid strike to the eruption of a super volcano. What would happen as computers literally become trillions of times smarter than we are--would they program our mass murder? Scientists, experts, and witnesses describe these and other vividly pictured disaster scenarios, from super bugs created in secret labs to black holes that could suck earth into oblivion. Using state-of-the-art computer-generated graphics and interviews with the world's top scientists, we will leave viewers pondering humanity's place in the universe and will reveal the most terrifying truth of all--that our greatest enemy is ourselves.

It was really good but thought provoking and quite a few times we just looked at each other and said "wow, that's scary". I guess that's why some people say Ignorance is Bliss, I mean, if you don't know about it you won't have to worry, but I am one of the few who actually likes knowing what's ahead, it scares me to think of the possibilities but I'm also not going to freeze and panic and start playing the what if game.

Really, if you get a chance to catch this show, watch it, it's good!

I have been trying to catch up on housework and I am ashamed to say that the one bag from our trip is STILL waiting to be reached but in my defense, I have not been feeling well and I have little sick ones to take care of. I guess my Martha-ness is going to have to be backburnered right now until I feel better. Tst Tst Tst, what a shame!

In two weeks, like I stated above, we'll be in TLF (temporary living facilities) here on base so I'm not doing planned menus and grocery shopping etc. Here is where you come in, I really need help with some easy and inexpensive ideas for meals while moving, it has to be quick, easy to fix and not require tons of pots and pans etc.

Paper plates is a must for us during this period, I have to laugh because my dad HATES eating out of paper plates so I always think of him when eating out of one.
Clean up has to be easy too, we have the house to clean and get ready for the Housing inspection so the least mess we add on, the BETTER.

I have so much to do around here, so I'll get going, here's what's going on in my house today: 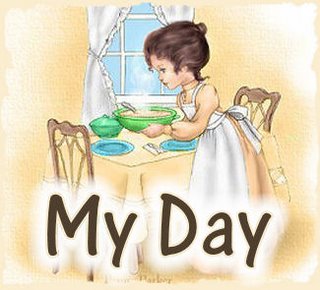