You wanna make a memory????

Have you all heard the new Bon Jovi song, You want to make a memory???

Now I know if you're anything like me, I was and always have been a HUGE Bon Jovi fan and for some reason they just seem to get better and better as time goes by. Jon Bon Jovi is very easy on the eyes too and doesn't seem to have aged an ounce.....wonder what his secret is and if he would tell us??? LOL

We're having a really hot day today, it's 96 degrees and I'm melting on the spot....well not really, but it feels like it. Doesn't it make you want to laugh at me already, I mean I'm complaining about it being too hot in Idaho when in 2 weeks I'll be driving to Arizona LOL
We'll talk about the heat once I get there!!! LMAO

These next few days I'm going to be so busy, this weekend we have to dismantle the trampoline, make sure the smoker/grill is spotless, mow the yards and prepare for the Housing Inspection walk through. I don't know if I'm feeling lazy or maybe I'm just in denial that we'll be out of here so soon, but I really really don't want to do anything. Can I just snap my fingers or click my heels 3 times and have it all done???? No??? Didn't think so, oh well. 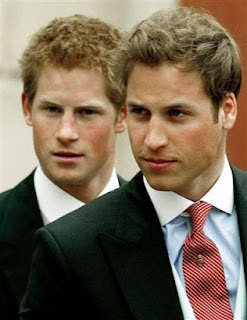 I have to ask, did anyone else see the Matt Lauer special with the Princes William and Harry?? Am I the only one who just loves these boys??? They're both so handsome and I loved their interview with Matt, they're down to earth and so sweet and the way they remembered their mom Princess Diana was just precious. They're planning a concert this year to commemorate the 10th year of her death.

I enjoyed hearing them talk about their lives and how they deal with being in the public eye all the time, their relationships with their girlfriends and family, what they think of their mother's death and what their plans are for the future. If you didn't catch the interview, try to next time it's just wonderful.

Anyway, I'm going through the stuff in the house, throwing out things we don't need and organizing what we do, and I just realized that we have way too much crap. Do we seriously need any of this??? I don't understand why people collect so much stuff, stuff that doesn't serve a purpose at all. Then it hit me, I'm emotionally attached to certain things.

You know like that piece of paper that I you can't bear to part with because you got it during a certain point in your life, or it brings back some sort of memory....and I tell myself, memories are in the heart and in our minds, we'll still have them, but I can't bear to throw it out. I swear it plays tricks on my mind.....I actually envision the paper slowly falling into the trash can, looking up at me with hurt in his eyes (or eye or does it even have any? lol) and saying "Noooooooooo, don't let me gooooooo". How's that for nutty??? LOL

I'm really going to have to think outside the box this time and force myself to part with that little flower stem that is in my purse, or that torn off piece of paper that reminds me of a few years back. *sigh* Wish me luck!!!

I'm sure you all noticed that I dropped by yesterday, I feel so out of the loop, like the whole world actually keeps moving when I'm not able to join in....that's so unfair isn't it? LOL
Shouldn't there be a rule against blogging when someone is not around??? You all just continued on with your lives and happenings and I showed up in the end waving balloons and acting like I know what I'm talking about LOL....it's a sad sad thing

Anyway, I need to get going, I have things waiting to get done and as much as I beg them, they just won't do it alone.

I would give anything for some rain right now, it's hot as ever here. See you all tomorrow, don't forget it's Slow Cooking Thursday and for once I would like to see TONS of participants, what do you say, will you give the girl a hand and get your bloggy friends to join in just this once???

God Bless,
at 11:50 AM
Email ThisBlogThis!Share to TwitterShare to FacebookShare to Pinterest
Filed under: blogging, moving, music