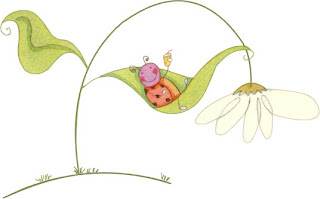 After a crazy weekend of running around and cleaning and unpacking the last little bits of stuff, I'm done, at least for today.

I plan on putting everything off until tomorrow, the kids have today off school too so I don't need to be running around which means I get to do whatever I wish...........catching up on all the blogs, catching up on my reading, playing some games on the computer, building that fairy house which has yet to be done, eating, monkeying around with the kids and just throwing all worries and caution to the wind. I think I deserve a day like that!!!

We had a wonderful day yesterday, Curt's Uncle Dave and Aunt Jean are vacationing about 2 hours from us and drove out to spend the day. We had such a great time, we didn't do anything extravagant but there's no need because for us the best part of this is sitting down and chatting and catching up, playing card games and laughing with the kids. They'll be by to see us again on friday before flying back to North Carolina early saturday morning.......it will be sad to see them go but we treasure all the time we spend together.

Here they are playing a game of "Back Alley Bridge", it's one of those family card games that has to be played whenever they get together. 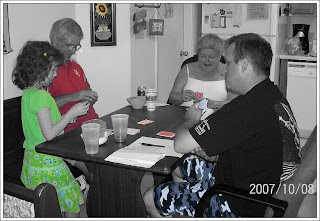 My kids are growing and with that comes all the funny and not so funny remarks and comments.

Nicholas is 4 years old and just drives us insane at times, he's very independent and assertive and wants things done his way. I could almost see a tattoo engraved on his forehead "it's my way or the highway". But beyond all that he is just as sweet as can be and says the funniest things.

This weekend Curt went out and surprised them both with some new toys, they each got a new pokemon, and I kid you not, these toys are tiny but cost $20 EACH. Yes I actually want to heave when I say that.....but anyway, he also got them some toys from Ben 10.
While attempting to open the toys and set them up, you know we have the box with the gazillion tie things and then because apparently that wasn't annoying enough for parents and frustrating enough for kids, they decided to go a step further and actually add SCREWS..........seriously, if you're a toy wrapper/packer whatever, could you give a parent a break?!?!?!?

But going back to the story, Curt pulled out the toy and the little paper booklet thingy fell to the ground, Nicholas reached down, picked it up and happily announced to the room "Hey my toy makes underwear" LOL
This is what he saw and I have to tell you, it really does remind me of underwear LOL

I don't think I've laughed so hard, the look on his face was one of amazement and confusion, I mean a toy that makes underwear is kinda neat but also unnecessary right??? LOL

Jasmine on the other hand is growing up, 8 going on 18 years old and we're already seeing the beginning of the teenage phase, it seems nowadays they become older younger.....if that even makes sense to you.

So she's been begging us for a cellphone and quite frankly we don't even have one ourselves. Other than for emergencies, I see absolutely NO need for cellphones, it's just my personal opinion obviously.........so when we told her that there's no way she's getting one, at least not right now because she's EIGHT.YEARS.OLD........her reply was calm, collected and unexpected "You guys are SO old fashioned". LOL

I had flashbacks of myself saying pretty much the same thing to my parents and though at the time I thought I was all that and a bag of chips, now I'm not finding it very funny. Guess what goes around comes around right???

And life goes on, everyday learning something new but hey, if others can do it so can we........or as Nicholas likes to say now "It's a doozie" LOL 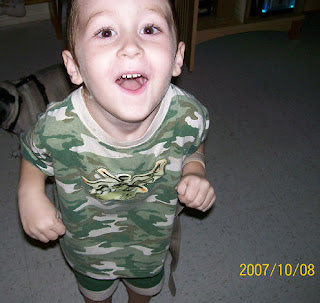 at 10:41 AM
Email ThisBlogThis!Share to TwitterShare to FacebookShare to Pinterest
Filed under: kids, relaxing