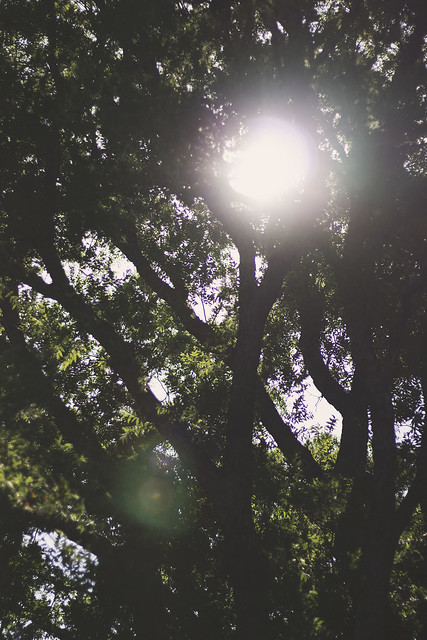 That is also me.  Yesterday morning. 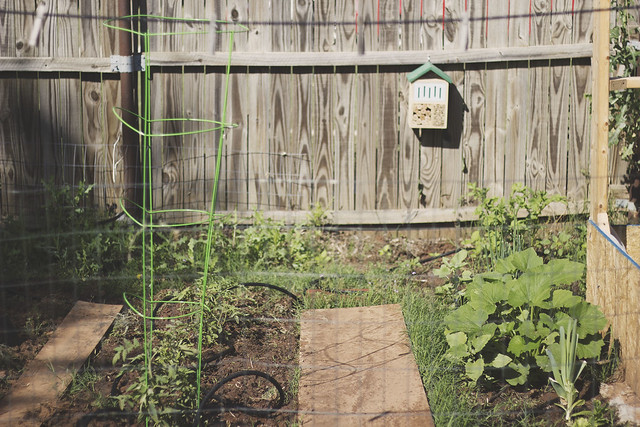 We were doing yard work, which we've been doing a lot of the past two weeks that Curt has been teleworking from home.  We like to get out there early morning, while it's still cool outside, because as it is with Texas weather this time of year, it is already well into the high 70's by the time the clock strikes 10 AM.

Curt was busy weeding and working his way around our fences, both in the fenced in backyard area and the very front of the house, near the street.

I started working in my veggie garden behind the potting shed/greenhouse.    Moving some veggies around, planning where the rows will go and so on. 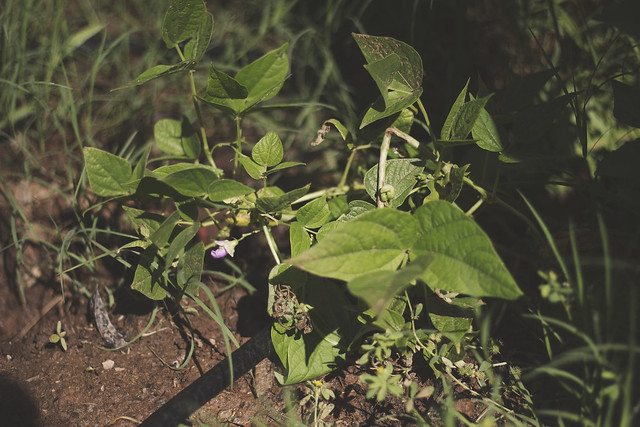 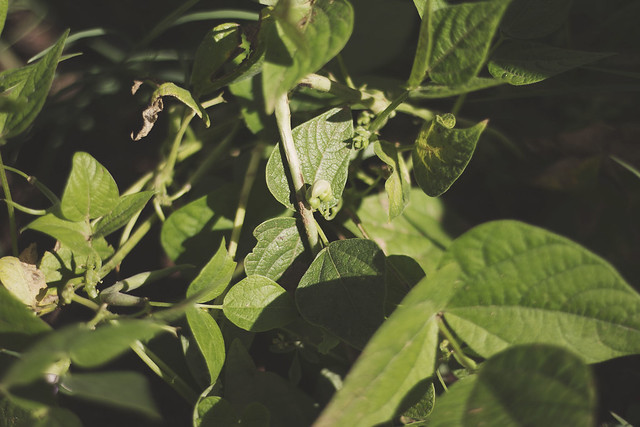 I then moved indoors and was rearranging, placing plants here and there, and just basically getting on with my day. 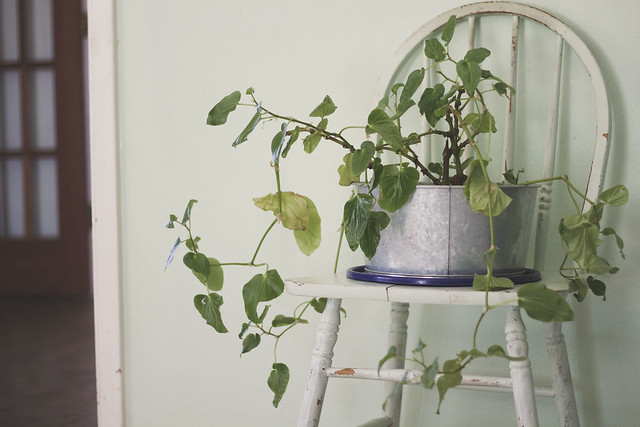 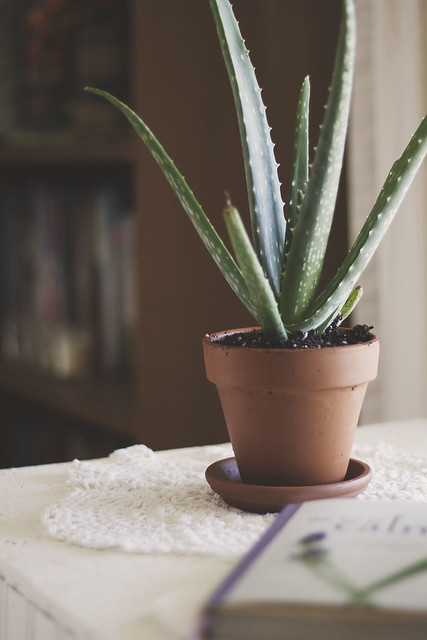 I was in the middle of this, when Curt yelled for me from outside, he wanted to show me something, and told me to grab the camera.  So I did, because you know me, as a blogger, the camera goes with me wherever I go and if there's a chance of something fun to share, even better. 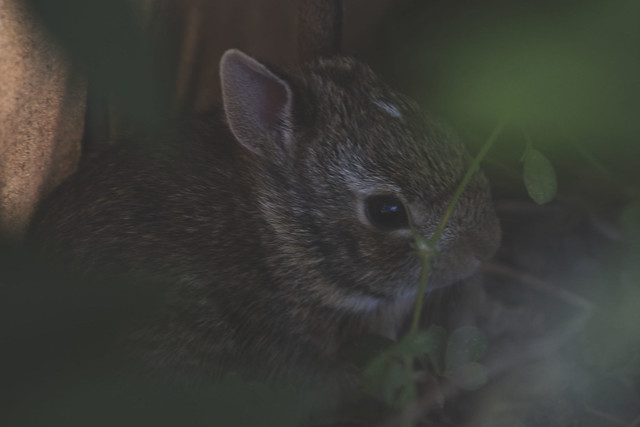 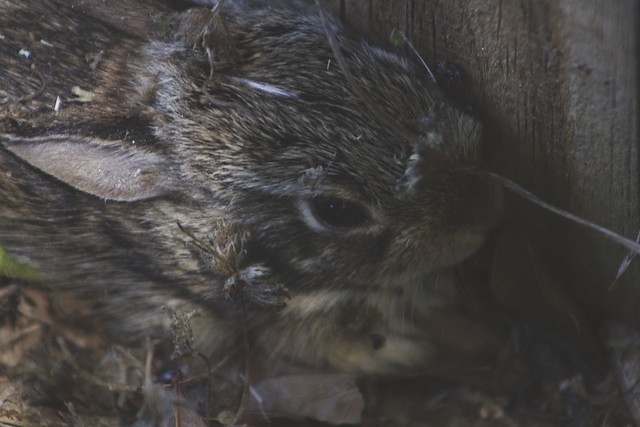 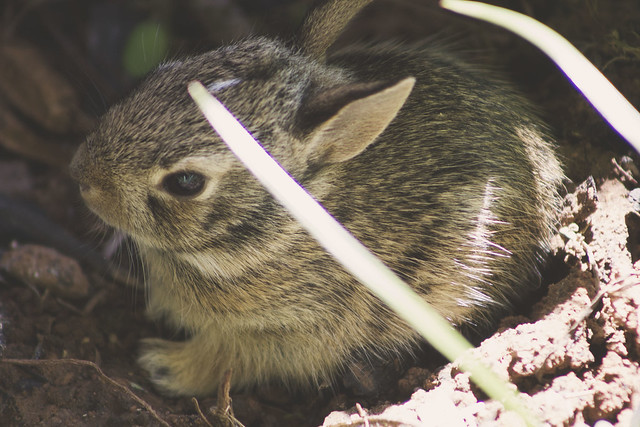 While weeding around the wooden fence, he came across baby bunnies.  He was so thankful that he didn't hurt them because they were just blending in with the fence and not moving an inch.  We stood there oohing and aahing, I took pictures and then he went on to weed the remaining fence near the front porch, and I went back inside.

I hadn't even been in but 5 minutes when he ran in to get me.  As he started weeding near the fence, three other small baby bunnies darted off.  One went towards the other two around the corner, and the other remaining two ran towards the house.  One hid under my bench on the porch and the other one, the little cutie above, hid in my flower bed.

At the same time that they darted in opposite directions, my husband saw a snake slither under one of the pallets that sits against the wall.

We didn't know what kind it was, but we knew it wasn't the usual small garden snakes we sometimes see around the countryside. 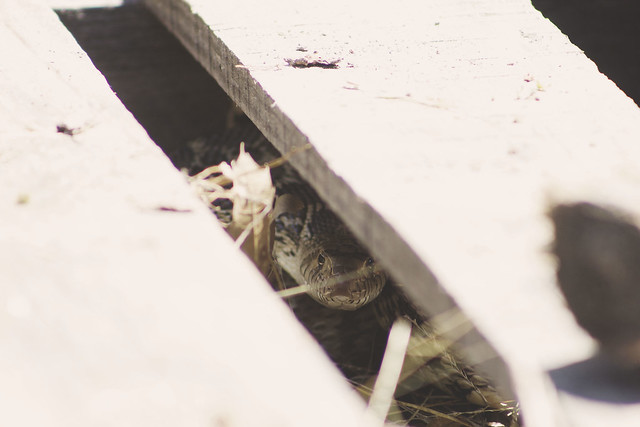 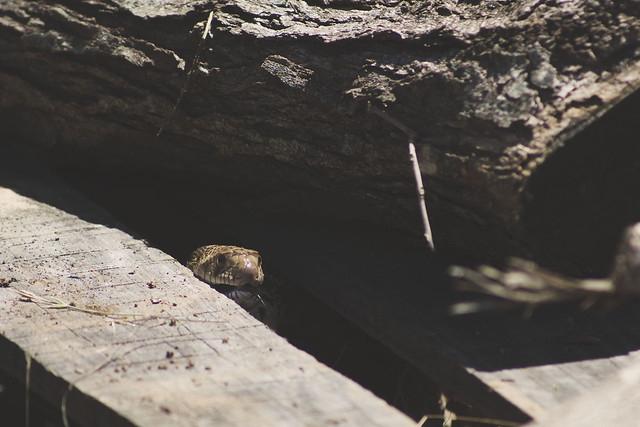 Yeah, this one screams STAY AWAY.  She started making a rattling noise and hissing at us.  I honestly thought she was a rattlesnake, because she sounded exactly like it, but this was before we saw her head. 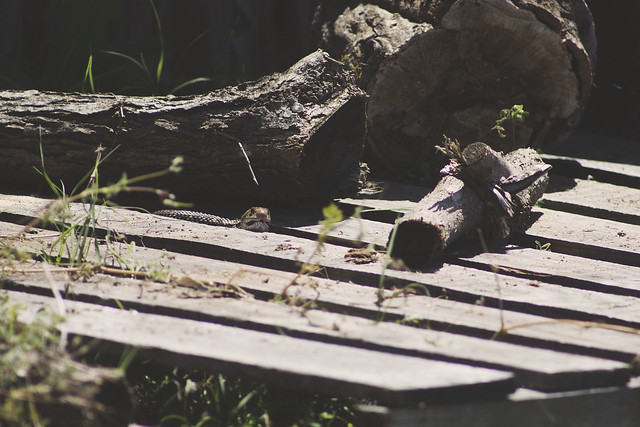 We kept an eye on her, just to know where she was because the last thing I wanted was for her to slither off into a spot I couldn't see.  I can't deal with that.

It also quickly became evident that what we had was not a rattlesnake but a bullsnake.  They mimic the rattlesnakes though that's why we were certain it was one until she started coming out from under the pallet and trying to strike at us. 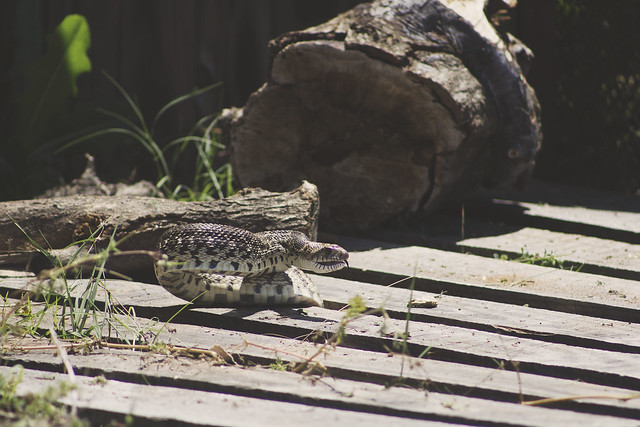 Now from what we know, bullsnakes are not venomous and usually not aggressive, but this one, boy was it annoyed with us.  I'm not sure if it was because we interfered with her plans for a meal (baby bunnies), or because we disturbed her hiding spot.

Curt made a rope with a noose at the end, and pulled a MacGyver by making it where at the pull of the rope, the noose tightened.  He placed it on the pallet, waited for her to strike again and managed to catch her.

Rattlesnakes and bullsnakes are illegal to hunt and kill, so he didn't kill it, but merely caught it for the animal shelter.

That thing was HUGE people, almost 6 foot long.  Every time he moved or hissed, I shivered from head to toe.  I'm not usually scared of snakes but my word, that one was unnerving.

Just glad she was caught, we had no idea she was under there as we hadn't cleared that area for a few months, since Winter time.  But, she's now gone, and the baby bunnies are all safe and reunited with her mom and dad.

This is one thing that I have to get used to, if I want to live out here.  We have 3 acres, lots of field and land around us, always see wildlife around here whether it be deer, coyotes, skunks whatever.  It's not surprising that we encounter snakes too.  Just need to be more careful and make sure that we keep our property cleared out. 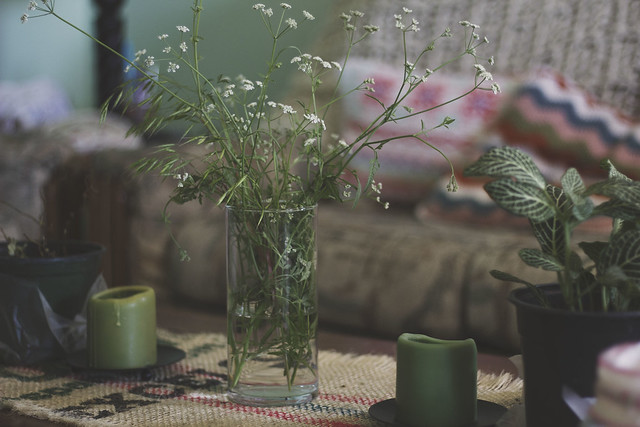 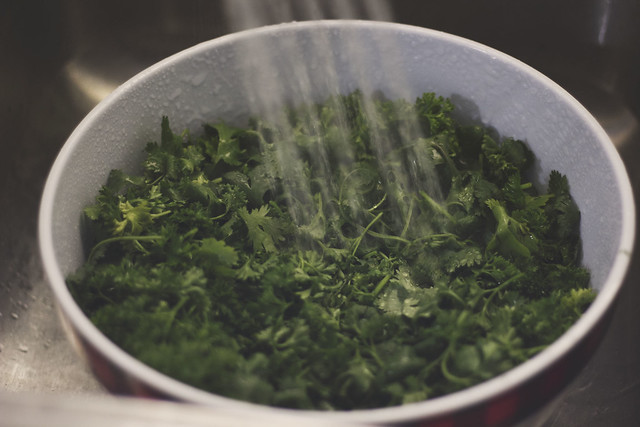 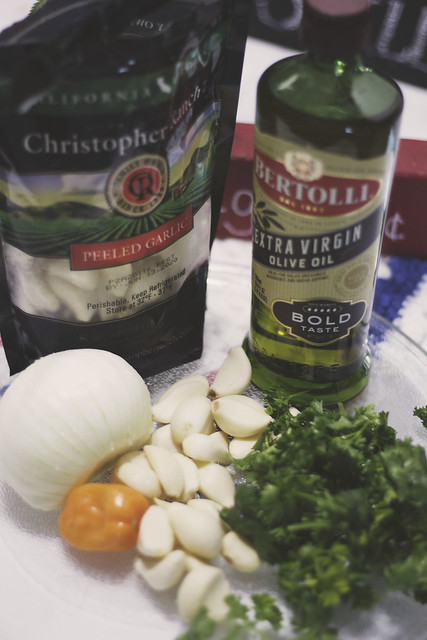 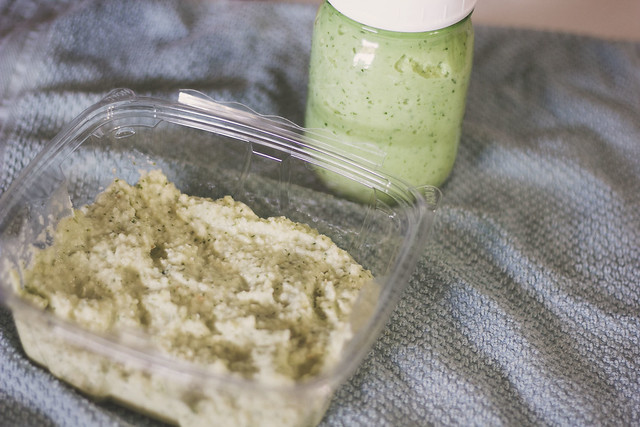 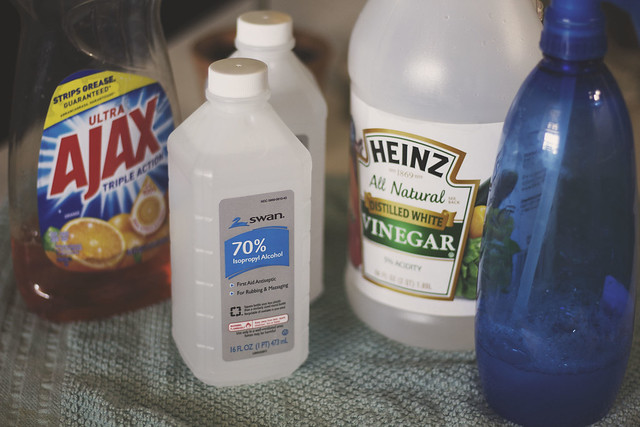 With that excitement out of the way, I managed to get back in the house and finish off all my chores before running out to pick up Jasmine from work.

I got my parsley and cilantro, washed, cut up and in the freezer.

Also made my garlic paste, added a few extra things this time to make it even tastier.  I didn't add that whole serrano pepper because as you know, or maybe you don't, they are pretty spicy and unlike the jalapeno peppers that lose their heat as you cook them, the serrano gains more heat as it cooks up.

I literally added a tiny sliver to my paste.

Was able to get a full mason jar for the fridge, and then almost a full tub that goes into the freezer, until needed.  I should have enough to last me for at least a month or so.

Then, I moved on to making my homemade cleaning mixtures.  It had been 2 months since I last made any, because I could not find rubbing alcohol in any store.  Luckily, we were at Walmart 2 days ago, and they had it in stock and even had hand sanitizer and gel as well.  So happy to see these products showing up in stores again. 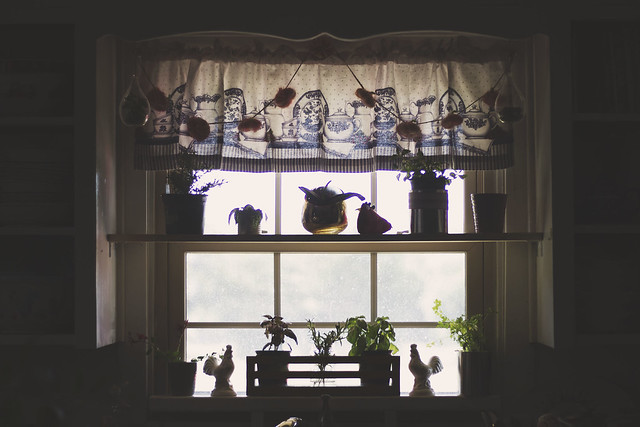 It was a crazy day but it made me realize just how blessed I am to live where I do, and how much I love my house, my property and every little animal that comes with it.  They're creations of God and are here for a reason.


Every animal has it's purpose, even if we are scared of them or don't want them around for our own selfish reasons.

I honestly didn't want the snake dead, just wanted it moved and maybe placed in a nearby field or just somewhere where it wouldn't get the baby bunnies, or lay eggs near my house.

It is par for the course when you live in a rural area, and I know there will be times when I'll encounter something I may not exactly be prepared for, but I am willing to learn and accept all that comes with living where we dreamed of.
at 7:25 PM
Email ThisBlogThis!Share to TwitterShare to FacebookShare to Pinterest
Filed under: country life, snakes 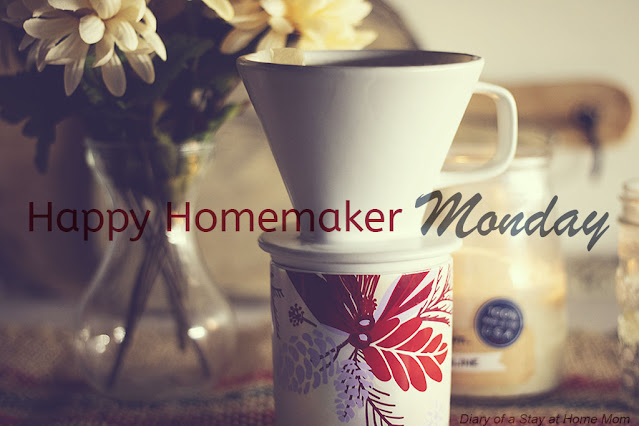