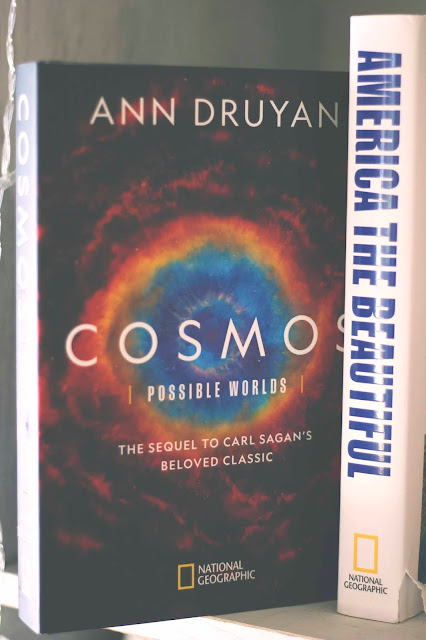 This sequel to Carl Sagan’s blockbuster continues the electrifying journey through space and time, connecting with worlds billions of miles away and envisioning a future of science tempered with wisdom.

Based on National Geographic’s internationally-renowned television series, this groundbreaking and visually stunning book explores how science and civilization grew up together. From the emergence of life at deep-sea vents to solar-powered starships sailing through the galaxy, from the Big Bang to the intricacies of intelligence in many life forms, acclaimed author Ann Druyan documents where humanity has been and where it is going, using her unique gift of bringing complex scientific concepts to life.

With evocative photographs and vivid illustrations, she recounts momentous discoveries, from the Voyager missions in which she and her husband, Carl Sagan, participated to Cassini-Huygens’s recent insights into Saturn’s moons.

This breathtaking sequel to Sagan’s masterpiece explains how we humans can glean a new understanding of consciousness here on Earth and out in the cosmos–again reminding us that our planet is a pale blue dot in an immense universe of possibility.

ANN DRUYAN is a celebrated writer and producer who co-authored many bestsellers with her late husband, Carl Sagan. She also famously served as creative director of the Voyager Golden Record, sent into space 40 years ago. Druyan continues her work as an interpreter of the most important scientific discoveries, partnering with NASA and the Planetary Society.

She has served as Secretary of the Federation of American Scientists and is a laureate of the International Humanist Academy. Most recently, she received both an Emmy and Peabody Award for her work in conceptualizing and writing National Geographic’s first season of Cosmos.

REVIEW:
My husband and I are huge fans of anything to do with Space.  I don't think there is a space related movie or tv show that we haven't watched.
Cosmos was one of our favorite tv shows.
It was absolutely brilliant, giving us insight into space, what it is presumably comprised of and filled with interesting information that will make even the least space enthusiast, let their imagination run wild.
In this new book by Ann Druyan she takes us through many of Voyagers discoveries, and goes into detail about the possibility of space life, organisms in the remotest corners of the universe and weaves it all together with relatable connections to the life we lead today.
Her book is not just the usual space filled textbook or research document, it is a personal story of her journey through space discoveries, her marriage to Carl Sagan and the continuing work he left behind.
Using the cosmic calendar as a guide, we are taken on a voyage through space and time.  Ann writes in a way that reads almost like a novel which makes the subject matter understandable to those of us who are not quite versed in the world of quantum physics and so forth.
Gorgeous photography, a plethora of interesting what ifs and for sures, makes this one of the books you need to read.
I particularly enjoyed not only the more scientific side of the book, but also the personal side that gives us a little more insight into the mind of Carl Sagan, his life's work and the missions that both Ann and Carl were involved in.
Thank you to TLC Book Tours and National Geographic for providing me with a review copy.
at 12:00 AM
Email ThisBlogThis!Share to TwitterShare to FacebookShare to Pinterest