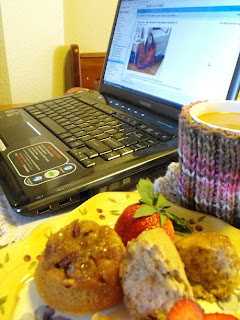 Mornings are one of my favorite times of the day. There's just something about it, not that I can pinpoint, but maybe it's the beautiful sun creeping in through the small slits on the curtains, or maybe it's the expectation of a full day ahead with so many possibilities.

Or maybe, just maybe, it's the fact that after I do my usual routine of popping a load of clothes in the laundry, clearing up any stray dishes from the night before and feeding the little hungry mouths around me....I get to sit here, right here in this spot with my laptop, my cup of hot coffee and my breakfast.

But don't go thinking this type of restful and splendorous breakfast happens every morning....there's days that I drag myself around, pull little tired bodies into the car for the trip to school and then arrive back home with a jumbled mind and an appetite for only a piece of toast....and then of course there's the days that I don't even make it to the computer until nighttime or the next day.

But shortly after the above photo was taken (on sunday morning), my new pretty laptop stopped working. Yep, it just stopped working and we took it in to the Geek Squad at Best Buy and were told that "it's a hard drive failure". You know what that means....it was kept, it was sent in to the Toshiba Site to get fixed and there's a very high probability that I've lost everything on the hard drive.

It's so frustrating to me, I feel like I have luck with computers, but such is life. So now I'm using hubby's laptop until mine is fixed "around 20 days" I was told. NOT.IMPRESSED.... considering it's only about a month old....but oh well life goes on.

I feel like I haven't updated my blog in forever, but between the laptop needing repair and all the usual housework and responsibilities that come with that....my kids both came down with bacterial eye infections caused by whatever virus gave them the cold.

I thought it was pink eye at first and I won't even tell you how horrible Jasmine's eyes looked yesterday, I couldn't even look at her without tearing up. She had these swollen eye lids...puffy eyes that were so red she looked like she hadn't slept in months and all this constant gunk. Nicholas was only affected on his left eye and thankfully it wasn't as bad as hers.

But being that they're not home schooled, I knew that their school would NOT allow them on campus if they had pink eye. So first thing this morning I set up appointments with the doctor. Instead of returning back to school like they were supposed to, they are home and they will be here tomorrow again.

They were prescribed antibiotic eye ointment and the doctor says by wednesday morning they will be ready to return to school. They'll miss the Spring Pictures tomorrow but they can always do the make ups.

So that's what I've been busy with....you understand now my absence the past few days. But let's talk about better things shall we?

Sunday morning I got up early and decided to make the kids a special treat. I think my babies needed some cheering up from all the sickies and eye stuff going on....so I whipped a dozen of these delicious Pecan Sticky Muffins....so good!

After lunch, I got to house cleaning and yes I know....I was supposed to have started my spring cleaning this week but it just won't do. I'll have to wait until the kids return to school and then thursday and friday is an early release day so they'll only be at school for 3 or 4 hours. I think I'll wait until the following week to really throw myself into some good old fashioned Spring Cleaning and I'm hoping you'll join me.

I'm sorry if I am babbling, I feel like I haven't seen my friends in a while and have all this stuff to say, it just feels like it's pouring out of me.

Oh, let me tell you what I watched. Yesterday afternoon while the dishwasher and the washer were both running with their respective loads of laundry and dishes, the kids settled down in front of the tv to watch a movie and hubby was on the computer, so I got to sit in my bedroom with piles and piles of laundry scattered around me, folding, separating, putting away and watching Lilies from Netflix. I really enjoyed it and so have many others, here's a review if you're interested.

Now take a look at this next photo, can you understand what it says? The kids had asked me earlier today for some paper plates to draw on, they were supposed to make masks for themselves but apparently decided against it....and I found this on the kitchen table when I went to set it for dinner.

It brought tears to my eyes and melted my heart. Jasmine drew it and if you can't tell what it says...it says "I love God". How beautiful is that?

Ok but I think I've gone on long enough, it's late and I have a feeling that a few of you may doze off while reading this book. So I'll end by showing you my newest crochet creation, well, the first of many. I plan to make at least 5 more to add to the plate.

It only took me an hour to make it and the lighting in this house is atrocious, makes everything yellow, but it's actually a chocolate cupcake with pink frosting and a cherry on top.

What's even better, is that inside, I tucked away some lavender scented yarn. All I did was use a few small strands dipped in lavender oil. It smells heavenly too and in the future when the scent wears off, I can just take a little syringe or something and squirt a few more drops in there.

So there you have it, I believe we're all caught up and you know what I've been up to. It's 10pm and the kids are finally asleep after a wrestling game between me and them to get the ointment into their eyes. It was sort of a tackle, jump on and squirt into eye kinda thing....very tiring I must say, who knew little ones could move so fast and put out so big of a fight? LOL

I'm off to finish watching Paranormal State and then it's off to bed with me, at least I know I can sleep in tomorrow since they're still at home as per doctor's orders.

I hope you all have a restful and blessed night!
at 12:10 AM
Email ThisBlogThis!Share to TwitterShare to FacebookShare to Pinterest
Filed under: crochet, laptop, sick kids