The Mighty Queens of Freeville! 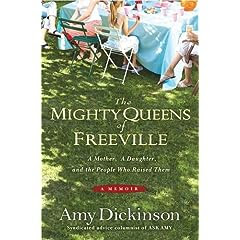 The Mighty Queens of Freeville was a great read, I won't say I absolutely loved it but I did enjoy her wit and her sense of humor.

These are the memoirs of Amy Dickinson, the author of the syndicated advice column ASK AMY. We are led through her journey in life, the trials and the tribulations and her relationship with her daughter Emily.

I was able to relate to her in the sense that she speaks of the women in her family as strong and amazing, which is exactly how I feel about the women in my own family.

The book tells the story of life as a single mother, Amy moved to London because of her husband's job but then finds herself divorced when their daughter is only two years old. The switch from married and dreams of a happy life to facing the unknown and raising a child on her own, send her back to Freeville....back to the arms of the women in her family who have all been through divorce and are now single mothers themselves.

One thing I did enjoy was the fact that Amy refrained from blasting her ex husband or even her own father who abandoned them when she was young. I think she tried really hard to be fair in her writing, even when you feel her despair and her sadness and anger at certain actions and situations, she stayed true to her own feelings through it all.

In the summertime of 2002, after spending months living off of her credit cards between freelance writing jobs, Dickinson sent in an audition column to the Chicago Tribune and became the papers replacement for the late Ann Landers. Here, Dickinson traces her own personal history, as well as the history of her mothers family whose members make up the Mighty Queens of Freeville, N.Y., the small town where Dickinson was raised, and where she raised her own daughter between stints in London; New York City; Washington, D.C.; and Chicago.

I'm not a single mother, but I AM a military wife which means that far too often, when my husband is deployed for months on end, I do become the only parent in the house, so there were a times in the book where she mentioned one thing or another that struck a cord, that made me go "uh huh, I know that feeling".

All in all, I really enjoyed the book, if not just for the story of how Amy Dickinson became a syndicated columnist but for her way of writing, reminiscent of sitting on the back porch with your friend talking about life and it's ups and downs.

If you're interested, you can buy the book here.......BUT, I'm also giving away my copy to a lucky reader. Just leave me a comment and make sure I have an email to reach you if you don't have your own blog or website.

I hope someone enjoys the book as much as I did.
at 11:05 AM
Email ThisBlogThis!Share to TwitterShare to FacebookShare to Pinterest
Filed under: giveaway