{ The Moment Before by Jason Makansi - TLC Book Tour } 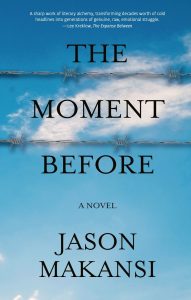 A woman and her beloved Syrian father, separated forty years earlier when he is swept up in a geopolitical odyssey from hell, are almost reunited by a lawyer struggling to save his Illinois hometown from financial ruin.

The unflinching story of an American-Arab’s life in limbo.

Tricked by the two people closest to him, Elias Haddad leaves his beloved daughter Cheryl Halia for what he believes is a short trip home to Syria to visit his dying father. Largely ignorant of Middle East politics, Elias is detained upon arrival in Damascus and conscripted into Assad’s army, beginning a forty-year geopolitical odyssey from hell which culminates in his captivity in Guantanamo during America’s post-9/11 War on Terror.

In her search for her father, Cheryl meets John Veranda, an idealistic lawyer who risks his family’s land, his marriage, and his aspirations for his hometown’s future for a relationship with Cheryl neither are prepared for.

Stuart Eisenstat, a dedicated federal bureaucrat, thinks he’s doing an old friend a favor when he picks John’s hometown as the perfect site for relocating Guantanamo detainees only to come face to face with the personal cost of America’s global ambitions.

As the author of both fiction and non-fiction, and the winner of 2017 Independent Publishers IPPY GOLD and 2016 Foreword Reviews INDIE SILVER, Jason Makansi’s writing has been praised as “immensely readable,” “entertaining, enlightening, and essential,” and “relevant to today’s political and cultural environment.”

“Jason Makansi’s “The Moment Before” has it all — family secrets, international intrigue, friendship and betrayal, love and lust. External circumstances, government policy, and personal choices place a father and daughter at a crossroads, and you won’t be able to put this epic tale down until you discover how they maneuver to alter their course. Gripping from the first page until the last.–Gianna Jacobson, Editor/Publisher, December magazine
“The Moment Before is a sharp work of literary alchemy, transforming decades worth of cold headlines into generations of genuine, raw, emotional struggle. Makansi weaves his political and global savvy together with an empathetic understanding of love and longing. This is an eye-opening American portrait that pits small-town government against Federal authority, discrimination against our conscience, and family members against themselves.”–Lee Kreklow, author of The Expanse Between
“Religious texts aver that to save one life is akin to saving the entire world. The beauty of Jason Makansi’s novel is in its intricate depiction of the coming together of three people to save a fourth. Taking the reader from Syria to Guantanamo to the American Midwest, The Moment Before is an extended meditation on friendship and fidelity amid the United States government’s ongoing war on terrorism.”–Mark Chmiel, author of Dear Layla, Welcome to Palestine 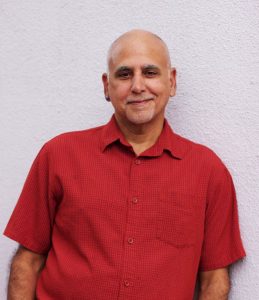 Jason Makansi, author of four non-fiction books relating to business, energy/environmental issues, and mathematical modeling, has published short stories in a variety of literary journals and collections. He is a 2009 alumnus of the Sewanee Writers Conference, has reviewed short story collections for The Short Review, and is currently a contributing editor for River Styx literary journal and Associate Editor for December literary magazine. In his spare time, he plays the viola in community orchestras, plays piano for fun, and rides his bike as often as he can. The Moment Before is his first novel.

I will have to be completely honest and say that I didn't enjoy this book, it certainly was not for me or my liking.

I tried to stick with it because I believe that every book deserves a chance, and sometimes it's easy to stop reading right away, but often times, when you read it through to the end, you end up enjoying the story or getting a lot out of it.

That unfortunately didn't happen for me, and I wish it had, but I have to be truthful and I try very hard to be completely up front and honest in my reviews.

Not to say that the story wouldn't appeal to others, because I'm sure it will, but it just wasn't for me.

at 7:48 AM
Email ThisBlogThis!Share to TwitterShare to FacebookShare to Pinterest
Filed under: tlc book tours