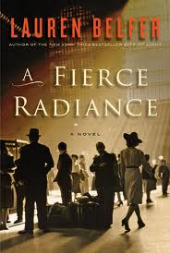 A Fierce Radiance by Lauren Belfer
• Paperback: 560 pages
• Publisher: Harper Perennial (March 29, 2011)
Penicillin operates as the source of romance, murder, and melodrama in Belfer's (City of Light) evocative WWII–era novel. When Life magazine sends strikingly beautiful photographer Claire Shipley to report on a promising new medication made from green mold, Claire, 36, the single mother of a young son, who lost her daughter to blood poisoning eight years before, is moved by the drug's potential to save lives. She also becomes smitten with resident doctor James Stanton, a man with two interests: penicillin and bedding Claire. But as the war casualties pile up, penicillin becomes an issue of national security and the politics of the drug's production threaten to disrupt the pair's lust-fueled romance, especially when James is sent abroad to oversee human trials of the drug. The pharmaceutical companies—including one owned by Claire's father—realize the financial potential in penicillin, which leads to a hodgepodge of soapy plot twists: suspicious deaths, amnesia, illness, exploitation, and espionage. Belfer handily exploits Claire's photo shoots to add historical texture to the book, and the well-researched scenes bring war-time New York City to life, capturing the anxiety-ridden period.

I loved this book.  It's beautifully written and depicts the race by the big pharmaceutical companies to mass produce penicillin during WWII.  Trust me, it's not a boring book or a heavy book that will leave you feeling drained, I've had my share of those.

There is love and there's espionage and action packed pages.   I think though that some of my favorite parts in the book were the ones where the author describes how the scientists grew mold in milk bottles, from collecting dirt samples throughout the country, even having to wade through sewage at times....all in the name of trying to save lives.

There's so much going on and you get to read the point of views of every part of this story, from the scientists, to the general population who so desperately need these medications, the panic, the heartache, the yearning to help and save lives.

It's a really good read, the author throws you into wartime New York and vividly describes the scene making you feel like you're right there, experiencing everything with the characters.  Brilliant book.

Here's the Tour schedule if you want to follow along with the reviews:

Thank you TLC for providing a copy of this book for review.  I was not financially compensated in any way, shape or form, and all opinions are mine alone.
at 10:32 AM
Email ThisBlogThis!Share to TwitterShare to FacebookShare to Pinterest
Filed under: book reviews