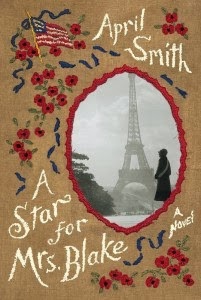 The United States Congress in 1929 passed legislation to fund travel for mothers of the fallen soldiers of World War I to visit their sons’ graves in France. Over the next three years, 6,693 Gold Star Mothers made the trip. In this emotionally charged, brilliantly realized novel, April Smith breathes life into a unique moment in American history, imagining the experience of five of these women.

They are strangers at the start, but their lives will become inextricably intertwined, altered in indelible ways. These very different Gold Star Mothers travel to the Meuse-Argonne American Cemetery to say final good-byes to their sons and come together along the way to face the unexpected: a death, a scandal, and a secret revealed.

None of these pilgrims will be as affected as Cora Blake, who has lived almost her entire life in a small fishing village off the coast of Maine, caring for her late sister’s three daughters, hoping to fill the void left by the death of her son, Sammy, who was killed on a scouting mission during the final days of the war. Cora believes she is managing as well as can be expected in the midst of the Depression, but nothing has prepared her for what lies ahead on this unpredictable journey, including an extraordinary encounter with an expatriate American journalist, Griffin Reed, who was wounded in the trenches and hides behind a metal mask, one of hundreds of “tin noses” who became symbols of the war.

With expert storytelling, memorable characters, and beautiful prose, April Smith gives us a timeless story, by turns heartwarming and heartbreaking, set against a footnote of history––little known, yet unforgettable.

You know when I think about favorite book genres, or genres in general, I am always pulled towards Historical fiction.  It fascinates me to no end and I find it highly educational too.

What April Smith as done in this book, is to bring us right to the forefront of WWI and to a group of 5 women who have lost sons in the war.  They may be completely different from each other, but the grief and the bond that connects them is one that runs deep.

Not only is this book well written, vividly descriptive and beautiful, but it touches on a very important but sometimes forgotten moment of WWI.  The aftermath and the lives touched by the war.

As a military wife and now retired Air Force Wife, this book touched me to the core.

I loved every single second of watching these 5 women come together to grieve their children, but especially on Cora Blake who's only son, enlisted without her knowledge and lost his life at the young age of 16 on a battlefield in France.

At times this book became painful to read, not for lack of good storytelling, but because my heart ached for these extraordinary women.  But I pushed on and kept at it, always wanting to know what was coming next and how these women would find closure from this trip to the quiet battlefields where their sons lost their lives.

Giving this one a huge thumbs up.

at 6:49 PM
Email ThisBlogThis!Share to TwitterShare to FacebookShare to Pinterest
Filed under: tlc book tours