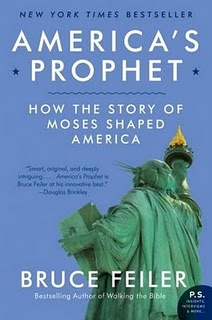 The pilgrims quoted his story. Franklin and Jefferson proposed he appear on the U.S. seal. Washington and Lincoln were called his incarnations. The Statue of Liberty and Superman were molded in his image. Martin Luther King, Jr., invoked him the night before he died. Ronald Reagan and Barack Obama cited him as inspiration.

For four hundred years, one figure inspired more Americans than any other. His name is Moses.
In this groundbreaking book, New York Times bestselling author Bruce Feiler travels through touchstones in American history and traces the biblical prophet's influence from the Mayflower through today. He visits the island where the pilgrims spent their first Sabbath, climbs the bell tower where the Liberty Bell was inscribed with a quote from Moses, retraces the Underground Railroad where "Go Down, Moses" was the national anthem of slaves, and dons the robe Charlton Heston wore in The Ten Commandments.

We all know the story of Moses but what if it was told in relation to what America is today?

In this book the author Bruce Feiler does just that, he goes back in time and traces the influences that Moses had and still has on America.

I hadn't even stopped to think about how many times the name Moses has been mentioned in the past, many Presidents have done so, they've touched on the commandments and the need to follow the Lord's word.

One thing I love is History and learning about what makes the world what it is today, where did we come from, how did we get here, what sacrifices were made and who was responsible or served as a great example.  This book has it all, it teaches us, it instructs us, it gives us hope and faith.

We learn how the Liberty Bell came about, what God's role played in it and even down to the inscription and what it means.


"PROCLAIM LIBERTY THROUGHOUT ALL THE LAND UNTO ALL THE INHABITANTS THEREOF LEV. XXV X."
I absolutely love how Feiler went above and beyond to trace these steps, often times attempting to put himself into certain situations to make us understand, like when he retraced part of the Underground Railroad.  I truly felt like I was right there with him.

It's a wonderful book, chock full of information, it will definitely make you stop and think about the role of Moses in the shaping of this Nation. 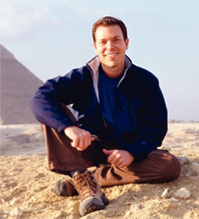 I received this book compliments of TLC Book Tours for a review.  All opinions are mine and mine alone.
at 6:52 PM
Email ThisBlogThis!Share to TwitterShare to FacebookShare to Pinterest
Filed under: book reviews