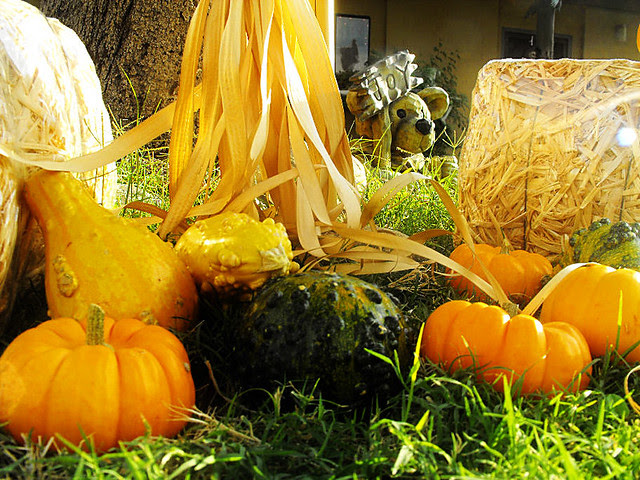 Bringing a bit of Fall to our home 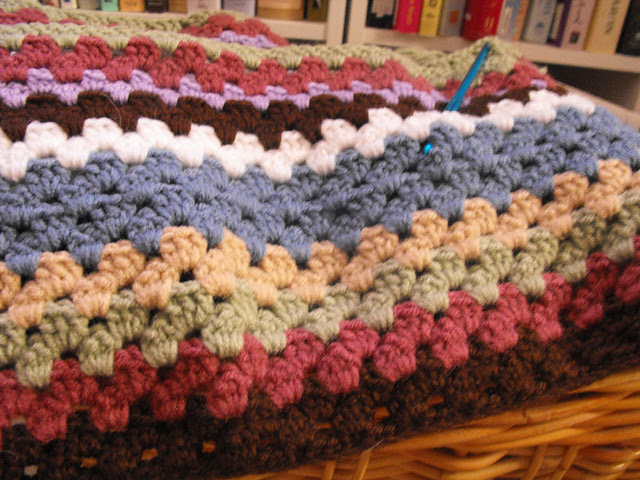 Working on my Granny Stripe blanket, it's slowly coming along.  When it's finished it will fit a Queen Bed, that being the reason it's so slow to progress but I'm thrilled with it so far, my only problem is that I'm running out of the yarns so pretty soon I'll have to go hunting for the colors. 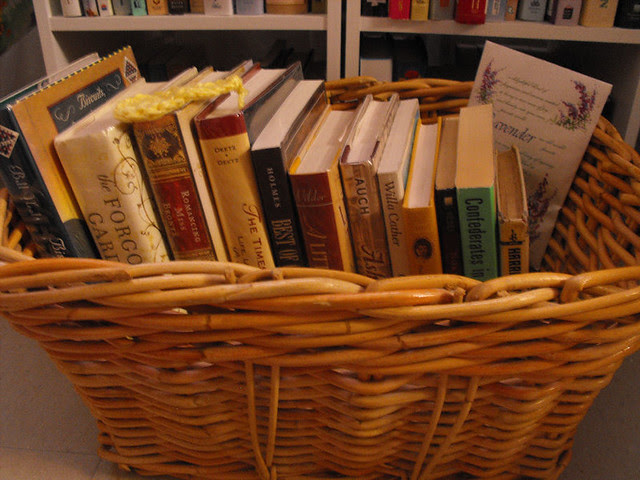 I made a trip to our base library this afternoon, all by myself, no one else wanted to go.

I always enjoy going with the family but I must admit to really liking the few chances I get to go alone, I tend to browse and peruse and go through book after book in my search for the right one.

I just never know which one it will be, I tend to go through phases in my reading and just recently I was really into Vampire books but quickly got tired of those.

Now, I'm in a historical, biography phase most specifically Pioneers, Pilgrims, Oregon Trail, Gettysburg and Underground Railroad, so it was fun looking for reading material in the library.

Here's what I came home with:


Ashes of Roses by Mary Jane Auch
The narrator, 16-year-old Rose Nolan, arrives at Ellis Island with her family, but right away they are beset by obstacles. Her baby brother is diagnosed with trachoma, and her father must take him back to Ireland; her uncle's family, while taking them in, makes it clear they are unwelcome. Rose finds work in a sweatshop and, after her mother, too, gives up on America, Rose rents a tiny room with her 12-year-old sister from the father of a union organizer, a girl named Gussie. High-minded Gussie helps Rose deal with her dishonest boss and finagle a job at the Triangle Shirtwaist Factory. There, Rose makes friends and begins to enjoy New York, but when the infamous fire breaks out, she finds herself trapped, along with all of her fellow employees (management locked the girls in each day); Rose's friends, including Gussie, are among the 146 fatalities.


Biscuits, Spoonbread and Sweet Potato Pie by Bill Neal
This delightful cookbook celebrates the glories of southern baking, with 300 recipes for the breads, biscuits, cakes, pies, cookies, and sweets that have been the pride of southern cooks for generations.


The Forgotten Garden by Kate Morton
Kate Morton's The Forgotten Garden takes root in your imagination and grows into something enchanting--from a little girl with no memories left alone on a ship to Australia, to a fog-soaked London river bend where orphans comfort themselves with stories of Jack the Ripper, to a Cornish sea heaving against wind-whipped cliffs, crowned by an airless manor house where an overgrown hedge maze ends in the walled garden of a cottage left to rot. This hidden bit of earth revives barren hearts, while the mysterious Authoress's fairy tales (every bit as magical and sinister as Grimm's) whisper truths and ignite the imaginary lives of children.

Romancing Miss Bronte by Juliet Gael
The publications aren't instant successes, and shortly after Charlotte's Jane Eyre creates a stir in London, a wave of deaths in her family leaves Charlotte as the sole caretaker of her aging father. That responsibility, combined with her average looks, seem certain to fate Charlotte to a life of spinsterhood—until a confession of undying love comes from an unlikely corner. Charlotte has a choice: will she settle for less than that all-encompassing passion she writes about? Or would she rather be alone for the rest of her life? Through letters written by Brontë herself and research on her life and life's work, Gael paints an accurate and intriguing depiction of the author, though her dedication to her material leads portions to read like straightforward biography.

The Times of their lives by - Life, Love, and Death in Plymouth Colony
The authors demystify both the political realities and the daily social lives of the New England colonists popularly identified as "Pilgrims." Both casual readers and researchers are offered an engaging and edifying introduction to the actual ramifications of life in the early 17th-century colony.

Best of Covered Wagon Women
The women who traveled west in covered wagons during the 1840s speak through these letters and diaries. Here are the voices of Tamsen Donner and young Virginia Reed, members of the ill-fated Donner party; Patty Sessions, the Mormon midwife who delivered five babies on the trail between Omaha and Salt Lake City; Rachel Fisher, who buried both her husband and her little girl before reaching Oregon. Still others make themselves heard, starting out from different places and recording details along the way, from the mundane to the soul-shattering and spirit-lifting.

Confederates in the attic : dispatches from the unfinished Civil War
Pulitzer Prize-winning journalist Tony Horwitz returned from years of traipsing through war zones as a foreign correspondent only to find that his childhood obsession with the Civil War had caught up with him. Near his house in Virginia, he happened to encounter people who reenact the Civil War--men who dress up in period costumes and live as Johnny Rebs and Billy Yanks. Intrigued, he wound up having some odd adventures with the "hardcores," the fellows who try to immerse themselves in the war, hoping to get what they lovingly term a "period rush."

Harriet Tubman:  Conductor on the Underground Railroad
Born a slave, Harriet Tubman dreamed of freedom. And through hard work and her willingness to risk everything-including her life-she was able to make that dream come true.But after making her escape, Harriet realized that her own freedom was not enough. So she became a conductor on the Underground Railroad, and devoted her life to helping others make the journey out of bondage. An invisible threat to plantation owners, she served as a symbol of strength and inspiration for her people.

A Little House Traveler
This volume combines three Wilder travel diaries: On the Way Home, recounting the 1894 trip from South Dakota to Missouri, with husband Almanzo and daughter Rose; West from Home, featuring letters written by Laura to Almanzo during her 1915 solo visit to Rose in San Francisco; and The Road Back, highlighting Laura's previously unpublished record of a 1931 trip with Almanzo to De Smet, South Dakota, and the Black Hills.

O Pioneers
The book takes place on the plains of Nebraska in the late 19th Century as the Prairie is settled be Swedish, Bohemian, and French immigrants trying to eke out a living from what appears to be a harsh, inhospitable land. The heroine of the book is Alexandra Bergson who inherits her father's farm as a young woman, raises his three sons and stays with the farm through the harsh times to become a successful landowner and farmer.

There is plenty here to keep me busy for a few weeks and I just can't wait to dive into these books and to be transported back in time.

Now I have to get dinner started, I'm making Chicken Curry, yummy!

Have a blessed night!
at 6:25 PM
Email ThisBlogThis!Share to TwitterShare to FacebookShare to Pinterest
Filed under: home life