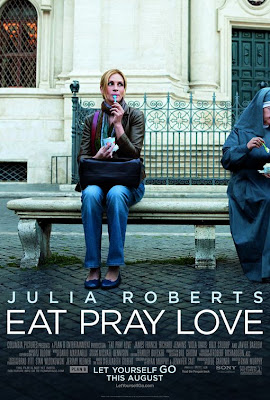 I don't often find movies that reach deep into my soul and shake it to very core, that squeeze my heart and make me think and rethink everything I've been doing and leave me wondering if I'm the woman I am supposed to be.

My kids and I are a little under the weather and I had both home with fevers this morning, while they settled into watch a movie in the living room, I grabbed my cup of coffee and sat with my laptop in the kitchen, nearby, keeping an eye on them but also watching something I've been hearing so much about.

The movie follows the book written by Elizabeth Gilbert.  I know that many like me, will read a really good book and when the movie version hits the screen, we're left with a bad taste in our mouth, they somehow seem to always leave out one of the biggest plot points or add in others that didn't exist, so I'm glad that I didn't read the book beforehand.

I went into this without any expectations, thoughts, wishes or preconceived notions of what the characters should look like and how they should act.

I left a completely different woman.

To say that this movie rocked me to the core would be an understatement, very seldom do I watch something that pretty much has my mouth hanging open every 5 minutes.  It was like being showered with enigmas, trying to cover my head but at the same time being slammed over and over with these questions that frankly, I should have been either asking myself or at the very least pondered over my 36 years of life.


La dolcezza di non fare niente! - The Sweetness of doing Nothing
A sweet Italian expression which in a way perfectly describes me, but that just brought me to the one scene in the movie where they're all sitting in Italy having dinner and coming up with words to describe each major city...New York~achieve. Los Angeles~succeed. Stockholm~conform. Rome~SEX. In their opinion every city has a word.  But then Liz gets confronted with the question "What is YOUR word?"  and she can't really answer.

It stopped me in my tracks.  Why?  Because quite frankly, I don't have a word, I could easily say I'm a wife, or I'm a mother but that doesn't really say who I am....who SANDRA is..... and it shocked me that I couldn't and still can't come up with that one single word.

At this point in my life,  "I am a woman searching for a word".

What is YOUR word?  If I were to ask you right now to stop what you're doing, look me in the eye and tell me your word, would you be able to?

As the movie progresses Liz gets hit with revelation after revelation, it's like knowing that everything you've thought was true, is not.   You think things work one way, but they don't.

One of the most poignant moments for me was when they were eating Pizza and her friend Sofie didn't want to because she thought she had been putting on weight, to which Liz replied:


I'm tired of saying no and waking up every morning and recalling every single thing I ate the day before, counting every calorie so I know exactly how much self loathing to take into the shower.  I've no interest in being obese but I'm just done with the guilt.
It's hard for me to even type that without getting teary eyed because that little dialogue described me to a tee.  THAT which she says she's tired of doing, is what I've been doing for many many years, until about a month ago when I finally said NO MORE.  I stopped obsessing with the scale, I stopped feeling guilty every time I took a bite and guess what????  I am eating whatever I feel like eating, whenever I feel like eating it and I haven't put on any weight because I'm happy and stress free.

There were so many good things being thrown at me while watching that I could easily make this the biggest blog post you've ever read.


God is not interested in watching a performance of how a spiritual person looks and behaves.
God dwells within me AS ME.
Two huge truths that I so often forget, so often deny, so often gloss over in my attempt to try and fit in with everyone else and with what society expects me to be.

Guess what?  It doesn't count if I pretend to be a Christian on the inside while being spiritually dead inside.

It doesn't count if I act like a Christian by throwing out scripture without once picking up the Bible.

Actions speak so much louder than words.  In ending this post, I want to encourage you to watch the movie, even if you've read the book, if nothing else, the powerful performance by Julia Roberts is enough to leave you gobsmacked.

I also leave you with some of my favorite quotes from the movie, powerful, touching, thought provoking and liberating.

If you are prepared most of all to face and forgive some very difficult realities about yourself, the truth will not be withheld from you.
***
Tis better to live your own life imperfectly than to imitate someone else's perfectly.
***
To lose balance sometimes for love is part of living a balanced life.
***
As smoking is to the lungs, so is resentment to the soul; even one puff is bad for you.
***
I’m here. I love you. I don’t care if you need to stay up crying all night long, I will stay with you. There’s nothing you can ever do to lose my love. I will protect you until you die, and after your death I will still protect you. I am stronger than Depression and I am braver than Loneliness and nothing will ever exhaust me.
***
There’s a crack (or cracks) in everyone…that’s how the light of God gets in.
at 9:03 PM
Email ThisBlogThis!Share to TwitterShare to FacebookShare to Pinterest
Filed under: eat pray love