I was approached by author and Submarine Officer, Michael Pennington, to review his two books, Zhena and Dohch, namely book 1 and book 2 of his series.


I usually don't read ebooks, I much prefer to hold the actual book in my hands and feel it's pages, but being that I'm a military wife, I was extremely intrigued by these books and decided to give it a go.  I'm glad I did. 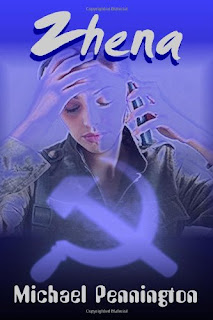 Susan was content with her ordinary life. As ordinary as it can be when you're married to an officer in the submarine force. For the past twenty years she has wanted nothing more than to help her husband Bill succeed in his career and raise her children. Then one day the phone rang. After this mysterious call, nothing was the same. Suddenly, she is able to analyze situations and people more rapidly than she thought humanly possible. Anything or anyone that is out of place is immediately noted and its threat level determined. She has fighting and weapons skills, despite having never even held a gun. And most concerning and disconcerting is the strange voice in her head telling her what to do in any given situation, as though her life is one big mission - a mission she knows nothing about.

I love a good fast paced book, truth be told if it starts getting boring or rambles on and on, I have a tendency to either stop reading completely or set it aside and only reach for it as a last resort.  Thankfully with this one I didn't have to do that.  I really enjoyed the writing and it's hard to believe that the author doesn't have many books out already.

The main character Susan is a strong woman willing to do whatever it takes to protect her family while struggling to understand why she knows certain things and is so comfortable in some situations without any memory of ever being in them.

Pretty good read, I enjoyed it.

A normal life, Susan truly wondered if she’d ever have one again. A year ago she discovered the truth, that everything she believed about herself and her entire life was a lie. Up until that fateful day, she was an ordinary housewife who was raised in an orphanage, had attended Purdue University and was happily married to a Naval Officer with two children. Then she received a mysterious phone call and nothing was the same. She began to have flashbacks to events she didn’t remember and also seemed to suddenly have amazing martial arts and weapons skills. Most importantly, she discovered “the voice”, a mysterious person inside her head who began giving information and advice in stressful situations. All of this forced her to look into her past only to discover nothing about her childhood was real, at least not for her.

The second book in the Zhena series was just as good as the first.  I came to really like Susan and I sympathized with what she was feeling, I felt for her, I want her to figure things out and I rooted for her with every page of the book.

Once again I was thrown into the lives of Susan and her family, the authors way with words kept me in suspense right until the end, I honestly did not know what was going to happen and THAT is what I love about a good thriller.  I don't want to know from the start, I don't want it all spelled out for me.  Would the character of Susan survive?  Would someone step up and help her or would she stand alone?  And the one word that keeps coming up: DOHCH!

Truly enjoyed this book, I can't wait for a third one.

Both books were provided to me by the author himself, Michael Pennington, for review purposes.  All opinions are mine alone.
at 5:51 PM
Email ThisBlogThis!Share to TwitterShare to FacebookShare to Pinterest
Filed under: book reviews