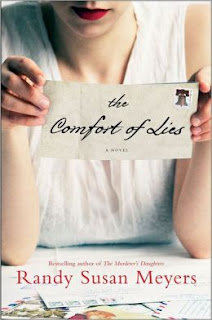 The Comfort of Lies by Randy Susan Beyers

Five years ago, Tia fell into obsessive love with a man she could never have. Married, and the father of two boys, Nathan was unavailable in every way. When she became pregnant, he disappeared, and she gave up her baby for adoption.

Five years ago, Caroline, a dedicated pathologist, reluctantly adopted a baby to please her husband. She prayed her misgivings would disappear; instead, she’s questioning whether she’s cut out for the role of wife and mother.

Five years ago, Juliette considered her life ideal: she had a solid marriage, two beautiful young sons, and a thriving business. Then she discovered Nathan’s affair. He promised he’d never stray again, and she trusted him.

But when Juliette intercepts a letter to her husband from Tia that contains pictures of a child with a deep resemblance to her husband, her world crumbles once more. How could Nathan deny his daughter? And if he’s kept this a secret from her, what else is he hiding? Desperate for the truth, Juliette goes in search of the little girl. And before long, the three women and Nathan are on a collision course with consequences that none of them could have predicted.

This book captivated me from the get go.  I think it deals with a very real scenario which happens very often in our day and age.

Tia falls in love with the man she can never have, Nathan.  He is a married father of two who is never going to be with her, and is never going to give her the happy ever after.  He thinks he has the best of two worlds, and Tia blinded by love enters into this affair.  When she tells him she is pregnant, he runs for the door, so she is left with the only choice she considers right, she gives the baby up for adoption.

We also have Caroline, who along with her husband adopt a beautiful baby girl, Tia's daughter.

Fast forward five years, and these people's lives are about to come to a screeching halt.

Tia has been receiving yearly letters from the adoptive parents with pictures of her little girl.  Not being able to completely put behind her what happened with Nathan, she decides to write him a letter and pass along the photos......but the person who opens that letter first is none other than his wife, Juliette, who Nathan has never told about the affair or the daughter he has.

This book is extremely well written, we are taken on this journey with 3 different women coming from very different frames of mind, different lives who are bound by one incident.

The writer brings forth points of view from each woman and that makes for very entertaining reading.  You start understanding where each are coming from and you never quite know what is going to happen from one page to the other, which is huge for me, because a predictable book tends to get boring.

at 10:07 PM
Email ThisBlogThis!Share to TwitterShare to FacebookShare to Pinterest
Filed under: tlc book tours