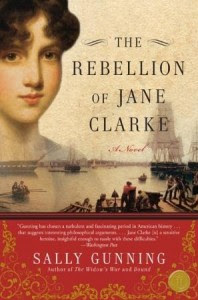 Jane Clarke leads a simple yet rich life in the village of Satucket on Cape Cod—until her refusal to marry the man her father has picked out as his son-in-law causes an irreparable tear in the family fabric. Banished to Boston to make her living as best she can, Jane enters a strange, bustling city awash with redcoats and rebellious fervor. And soon her new life is complicated by her growing attachment to her frail aunt, her friendship with the bookseller Henry Knox, and the unexpected kindness of British soldiers, which pits her against the townspeople and her own brother, Nate, a law clerk working for John Adams. But it is the infamous Boston Massacre—the killing of five colonists by British soldiers on a cold March evening in 1770—that forces Jane to question accepted truths as she confronts the most difficult choice of her life.

Sally Gunning is the author of two previous novels, The Widow’s War and Bound. She lives on Cape Cod with her husband.
Find out more about Sally at her website, and add her as a friend on Facebook.

This book was right up my alley, I know you probably get sick of me saying over and over just how much I love Historical Fiction but I really do.


For that alone, I enjoyed reading more about the Boston Massacre but also seeing it from a different side of the fence, from the British Red coats and how they were treated or may have been treated.

I didn't however really connect with the main character of Jane, she was actually really irritating to me at times.

Maybe it's because I have no patience for wishy washy people in general and dislike immensely when a person doesn't know on which side of the fence they stand, for that reason alone, the book fell short for me.  The ending was not what I was expecting at all and it did leave me a little annoyed, it almost felt like nothing was resolved nothing was accomplished, kinda like watching those movies where the ending leaves you sitting there with your mouth open wondering what the heck just happened?

Not a bad read, just not my cup of tea.

Check out the other tour stops:

TLC Book Tours provided a proof copy of this book for review purposes. All opinions are mine alone.
at 1:06 PM
Email ThisBlogThis!Share to TwitterShare to FacebookShare to Pinterest
Filed under: book reviews