{ News of the World by Paulette Jiles - TLC Tour and Giveaway!!!

About News of the World

In the aftermath of the Civil War, an aging itinerant news reader agrees to transport a young captive of the Kiowa back to her people in this exquisitely rendered, morally complex, multilayered novel of historical fiction from the author of Enemy Women that explores the boundaries of family, responsibility, honor, and trust.

In the wake of the Civil War, Captain Jefferson Kyle Kidd travels through northern Texas, giving live readings from newspapers to paying audiences hungry for news of the world. An elderly widower who has lived through three wars and fought in two of them, the captain enjoys his rootless, solitary existence.

In Wichita Falls, he is offered a $50 gold piece to deliver a young orphan to her relatives in San Antonio. Four years earlier, a band of Kiowa raiders killed Johanna’s parents and sister; sparing the little girl, they raised her as one of their own. Recently rescued by the U.S. army, the ten-year-old has once again been torn away from the only home she knows.

Their 400-mile journey south through unsettled territory and unforgiving terrain proves difficult and at times dangerous. Johanna has forgotten the English language, tries to escape at every opportunity, throws away her shoes, and refuses to act “civilized.” Yet as the miles pass, the two lonely survivors tentatively begin to trust each other, forming a bond that marks the difference between life and death in this treacherous land.

Arriving in San Antonio, the reunion is neither happy nor welcome. The captain must hand Johanna over to an aunt and uncle she does not remember—strangers who regard her as an unwanted burden. A respectable man, Captain Kidd is faced with a terrible choice: abandon the girl to her fate or become—in the eyes of the law—a kidnapper himself.

Paulette Jiles is a novelist, poet, and memoirist. She is the author of Cousins, a memoir, and the novels Enemy Women, Stormy Weather, The Color of Lightning, Lighthouse Island, and News of the World. She lives on a ranch near San Antonio, TX.
Find out more about Paulette at her website. 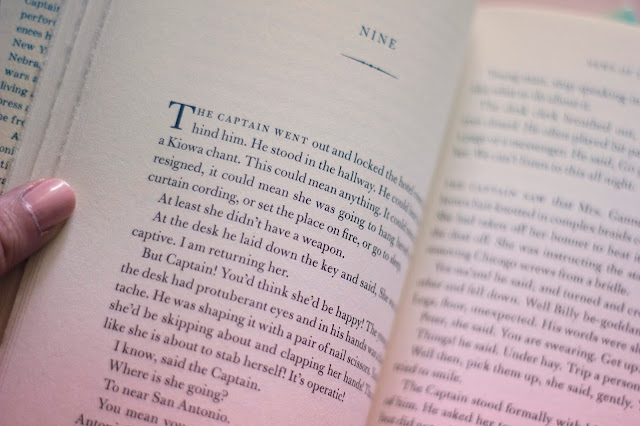 I will start by saying that the fact that the book features Wichita Falls, was one of the biggest things that drew me to it.  But with that aside, the historical and civil war theme of the story, was another reason why I knew that I had to read it.

There was only one thing that I didn't enjoy about the book, or rather the way it was written, and that was the fact that when someone was talking it wasn't in any kind of quotation marks, so I never really knew someone was having any kind of dialogue.  It made it a little distracting for me, but I will say that it didn't take away from the great story telling.

In the late 1800s, Captain Jefferson Kidd makes a small living riding from town to town reading the news from around the world.  During one of these readings, he is offered a $50 gold piece, and asked to escort a young girl back to her family in San Antonio.

The young girl, of German descent, had been kidnapped by the Kiowa TribeCaptain Kidd is well known to others that travel from town to town and is for this reason that he is asked to escort a German orphan that was abducted by the Kiowa tribe at the age of 6.  Now 10 years old, Johanna doesn't quite understand what is going on or why she has been removed from the only place she recognized as home.  She truly believes she has been kidnapped and not rescued.

What ensues during that trip from Wichita Falls to San Antonio, is a story that will touch your very soul.  The two form a bond, as they make their trip south to San Antonio.  Captain Kidd continues his readings as he passes towns, and Johanna helps him by collecting the money.  Eventually, she starts seeing him as her grandfather.

Upon reaching her family, they both quickly realize that things do not look good at all.  Captain Kidd is now put in a very difficult position, he either hands her over to a family that is no good and scares him and the girl, or he keeps her with him.

This story was fantastic.  It reminded me a bit of True Grit, and if you enjoyed that book/movie, you will certainly enjoy News of the World. 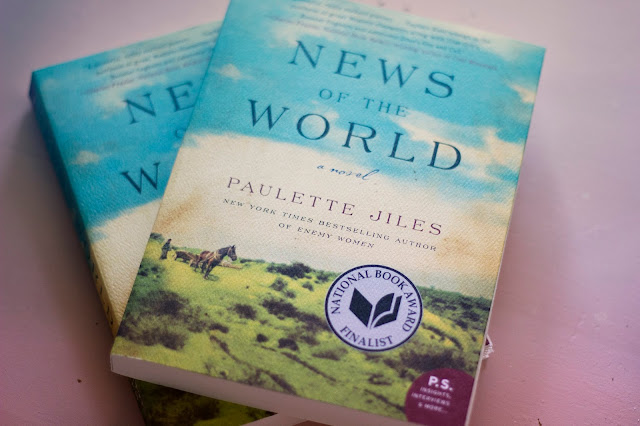 I have an extra copy of this amazing book, to give away.

All you have to do is leave me a comment below, that's it :)

Giveaway is open to US and Canada residents, only.   I'll draw a winner this weekend, so if you think this is a book you would enjoy, go on and enter.  Good luck!!!