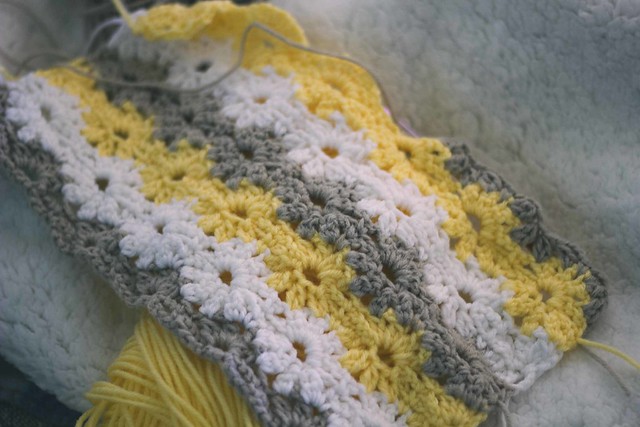 I have but two photos for you today, and the reason for that being that Mister Marley has been poorly today and it's like having a little child in the house again.

Everything I wanted to get to today was put on the back burner so I could take care of my little boy.  It's nothing serious, but being the puppy he is, he tries to eat everything he finds, so we're not sure if he got into something he shouldn't.  His stomach was not right and he was getting sick and going potty all over the house, we would clean up and he would do it again, just non stop. 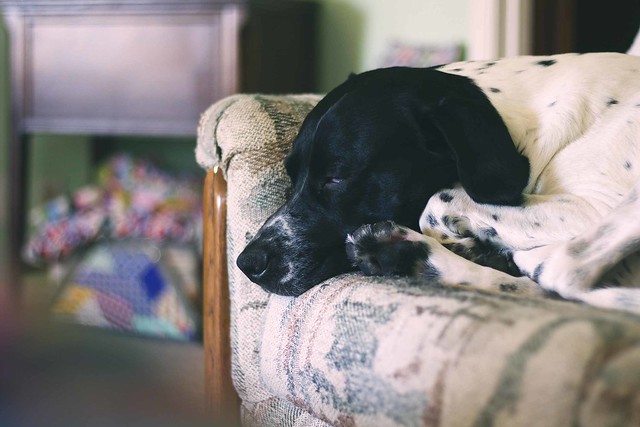 When you have a 2 year old puppy who is constantly happy and playing and you see him not feeling well, it breaks your heart.

This had all started when I went to the store to get a few things we needed.

I immediately made him some plain white rice, which he didn't want to at first but finally coaxed him into eating.

Then I went to sit on the couch with him and left all my other chores to be dealt with later.  I wanted to get him comfortable and asleep.

He did eventually fall asleep next to me, and slept for a good hour.  He hasn't been sick or gone potty since then, aside from the usual wee, and he's been back to his playful and happy mood.  I'm so glad because I hate seeing the little ones sick, especially since they can't tell us what is wrong.

All the time I was on the couch with him, I couldn't just sit without doing anything at all, so I started a quick crochet cushion/pillow for my bedroom. 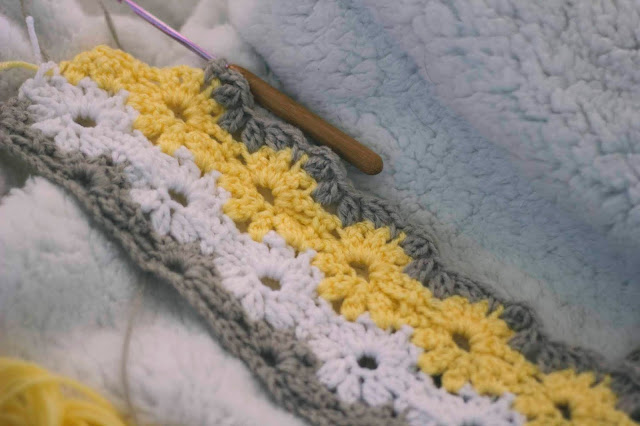 It is the first crochet project of 2019, and I'm almost done with it.  The pattern works up really quickly, it's the Crochet Petal Stitch from Daisy Farm Crafts.

I will finish off the front of the pillow tomorrow morning as I have maybe two rows left???  I'm not sure if I'll do a back exactly the same or if I'll just do plain striped rows.  I don't have much grey yarn or yellow yarn left, this project came about as a means to use up some leftover yarn that I had laying around which was not big enough for a blanket.

I am also starting another big blanket tomorrow, it's a pattern I have not yet tried and I'm very excited to give that one a go, so I'll show you that tomorrow as well.

Not much to share today I'm afraid, since I didn't do a lot as I was on the couch with my little boy.

I did however watch a tv show that I found very interesting, especially since I'm a huge history buff and love anything related to England and Scotland.

The show is called Rise of the Clans, and you can find it on BBC or watch online here.

The first episode was about Robert the Bruce and the battle of Culloden, which if you are Outlander fans, you will no doubt know exactly what I'm referring to.

Alright friends, I'm going to read a little, paint my nails and watch another episode of Rise of the Clans.

Hope you're having a wonderful weekend :)
at 7:49 PM
Email ThisBlogThis!Share to TwitterShare to FacebookShare to Pinterest
Filed under: crochet, marley, sick puppy