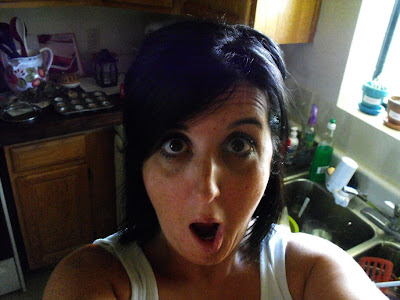 Ever wanna tuck your tail between your legs and just run for the hills? Or even just out the door and down the street?

I have those days, lest you think that my life is perfect and a tiptoe through the tulips all the time.

Today is a perfect example of one of those....I found myself waking up late, dragging around, slacking on everything that I should be doing.....and those dishes in the background, well they only went in the dishwasher at 5pm. *GASP* Shocking I tell you!

Of course it doesn't help that it was 115 degrees. Gross!

But it's not that I'm lazy, as a matter of fact I hate, well maybe hate is too harsh a word, I strongly dislike a messy house, cause you know, you never can tell if the doorbell will ring and the President will be standing there waiting to come in for coffee....or maybe maybe it's those folks with the big check and the colorful balloons telling me I'm a grand prize winner of a million dollars.

No, it's just one of those days, we all have them and I don't get them very often but when I do, man alive, I want to slap myself out of it.

To make matters worse, my little one started complaining of ear ache 2 days ago, but he kept running around, not having a fever, not screaming in pain, or pulling at his ears, NOTHING. Just telling me that the outside of his ear hurt, not the inside. I thought at first it may be that he hit his ear or maybe a pimple is growing or something.

The kids had also been swimming last week and I thought maybe a little water got in there, but he didn't really complain. 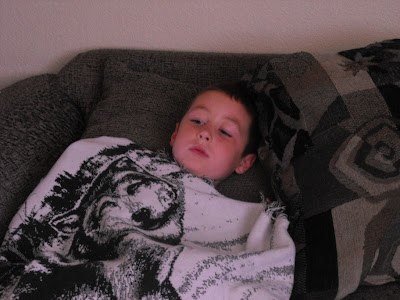 But last night, he came and slept with mommy because daddy is working the night shift, and he kept me up all night complaining that he couldn't lay on his ear, that it hurts.

This morning it actually looked a little red and a bit swollen on the outside, so I called up the base clinic and of course there were no appointments, and given the option to either wait until tomorrow or get a referral for Urgent Care, I did what any other mother would have done, I told the lady to type her little pretty fingers away and give me the referral.

We took him to the Nextcare Urgent Care close to us and they were very helpful.

We arrived at 2:55pm and by 3:30pm we were walking out with a prescription.

Turns out my little one has Swimmer's ear, not too bad but the beginning of it and his ear canal is inflamed and red which apparently also causes the outer ear to get a little swollen and red. I totally did not know that.

So now he's on Antibiotic/Steroid Drops for the next 7 days. I'm sure he'll be feeling a lot better within the next few days.

With all my pity party attitude earlier, it did feel good to have the doctor say "I'm so glad you made the decision to bring him in right now or this would have gotten a LOT worse".

See, my day wasn't ALL that bad?

Now I'm going to go jump in the bathtub and drown my sorrows, literally, they need to go away cause I don't have the patience for another day of woe is me.
at 9:31 PM
Email ThisBlogThis!Share to TwitterShare to FacebookShare to Pinterest
Filed under: family life