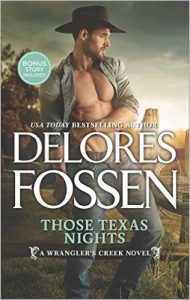 The Granger siblings thought they’d left their ranching days behind, until fate sends them home to Wrangler’s Creek, Texas—and into the passionate arms of those they’d least expect…

It’s some run of bad luck when Sophie Granger loses her business and gets left at the altar all in one day. Desperate to not appear jilted, Sophie begs Clay McKinnon, Wrangler’s Creek’s smoking-hot police chief, to pretend they’re having an affair. But Clay refuses, leaving Sophie to retreat to the family ranch to lick her wounds.

Hoping to leave his disreputable past behind, Clay moved to Wrangler’s Creek for a fresh start. But that looks unlikely when Sophie’s ex-fiancé shows up married to Clay’s impulsive kid sister. Overcome, Sophie re suggests the affair—but this time for real. Clay is hesitant. City-girl Sophie isn’t usually his type. But he can’t deny the desire she elicits—or his yearning to have her plant her cowboy roots for good.

USA Today bestselling author, Delores Fossen, has sold over 70 novels with millions of copies of her books in print worldwide. She’s received the Booksellers’ Best Award, the Romantic Times Reviewers’ Choice Award and was a finalist for the prestigious Rita ®. In addition, she’s had nearly a hundred short stories and articles published in national magazines.

This was such a cute read, the perfect mixture of romance, small town and a little mischief.

As always in these light romance reads, the main characters start out not very happy with each other, and as the story develops, so do their feelings.

Sophie was left at the altar and to try and save face, she makes a proposition to the town's police chief, Clay.  Have him pretend to to be involved with her, the idea to make the whole town believe they're having an affair.  Clay is not having it though, he moved to the small town to escape drama and live a quiet life, and this is not what he is looking for.

Clay is also trying to deal with his younger sister and the gossip that seems to be all around town about him and Sophie.  When his young sister shows up back in town married to Sophie's ex, things just go from back to worse to hilarious.  Pretty soon the two can't hide their feelings, and then you know exactly where this all goes.

It was such a fun read, light, humorous, steamy at times.
at 6:23 PM
Email ThisBlogThis!Share to TwitterShare to FacebookShare to Pinterest
Filed under: tlc book tours